Marc Marquez has ignited paddock speculation that he’s looking to complete the perfect year in MotoGP, as he makes it three from three to win easily in Argentina.

The young Spaniard didn’t have the race all his own way, however, with a fierce battle in the opening stages seeing him back in seventh after a poor start, while Jorge Lorenzo cleared off at the front.

“In the beginning it was a little difficult because there were so many riders in front, and I had a bad start on the dirty side of the track, but I was having fun! Then I saw Jorge pull a lead, and I thought ‘ok, stop playing now!’ I knew with nine laps to go Dani was closing in, so I went for it and pulled away at the front.”

Lorenzo was able to break at the start, but after a toying Marquez disappeared past him, a late charge form Dani Pedrosa left him able to make a move past Lorenzo on the penultimate lap to secure second.

Speaking after, Pedrosa said: “I actually did enjoy the race but kind of hated it too! I was riding very nice mid race to the end, but I was alone and just catching a little by little. It was fortunate I got second place, but I slept a little at the start trying to keep the tyres!”

Valentino Rossi was fourth, despite podium pace, after repeated being tangled and ran wide by Stefan Bradl, before Rossi was eventually able to break free and clear off, but by that point the opportunity to bridge over as Pedrosa had was gone.

Andrea Iannone was a career-best sixth, once again running in third spot in the early stages of the race before settling down behind Rossi and Bradl, but ahead of the Tect 3 Yamaha duo of Smith and Espargaro, who were able to team up to dispose of Andrea Dovizioso.

Scott Redding was 14th, coming out worst of a battle for best privateer Honda with Nicky Hayden and Karol Abraham, while Michael Laverty had a good battle with Colin Edwards for 18th, only being demoted from 17th when Aleix Espargaro, recovering from an early crash, passed him. 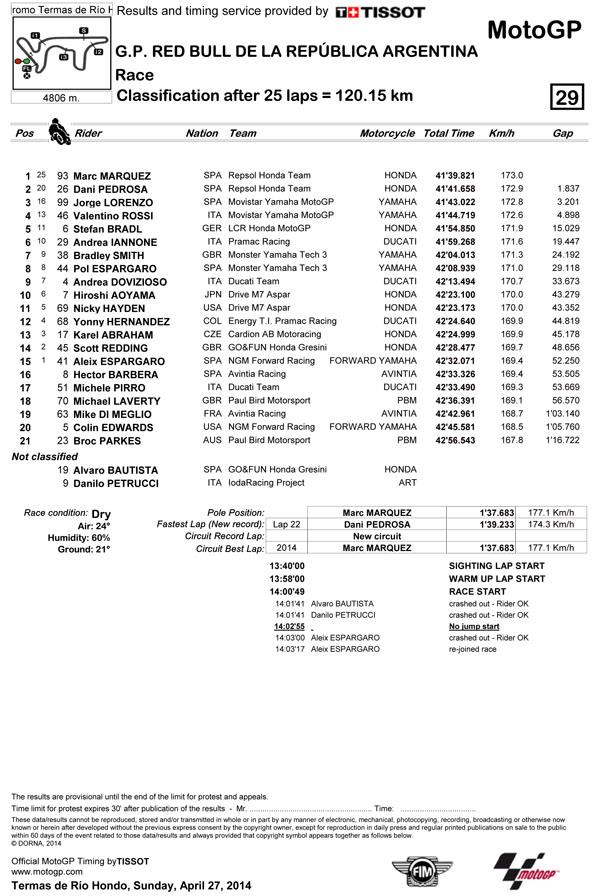