Malaysia MotoGP: Pedrosa in the dry, Lorenzo in the wet as mixed conditions hit

Dani Pedrosa has ended the opening day in Sepang fastest of the MotoGP grid, but it was Jorge Lorenzo who topped the final session of the day, after a tropical thunderstorm caused free practice two to be delayed and left track conditions wet.

Pedrosa topped a close front row in FP1, finishing 0.014 ahead of Aleix Espargaro, with Lorenzo only a further 0.023 back to leave the provisional front row covered by 0.037 seconds. World champion Marc Marquez was fourth, while Cal Crutchlow was the best of the Brits in eighth.

FP2 was a different story, however, with heavy rain leaving standing water on many parts of the track. Jorge Lorenzo controlled the session, finishing 0.2 ahead of the Repsol Honda pair of Marquez in second and Pedrosa in third.

Crutchlow was again the best of the Brits in tenth, with Bradley Smith in seventeenth, Michael Laverty in nineteenth and Scott Redding in twenty-first. Valentino Rossi was back in fifteenth.

Andrea Iannone was a heavy crasher in the session, coming back to the pits on a marshal’s scooter but holding his injured elbow. 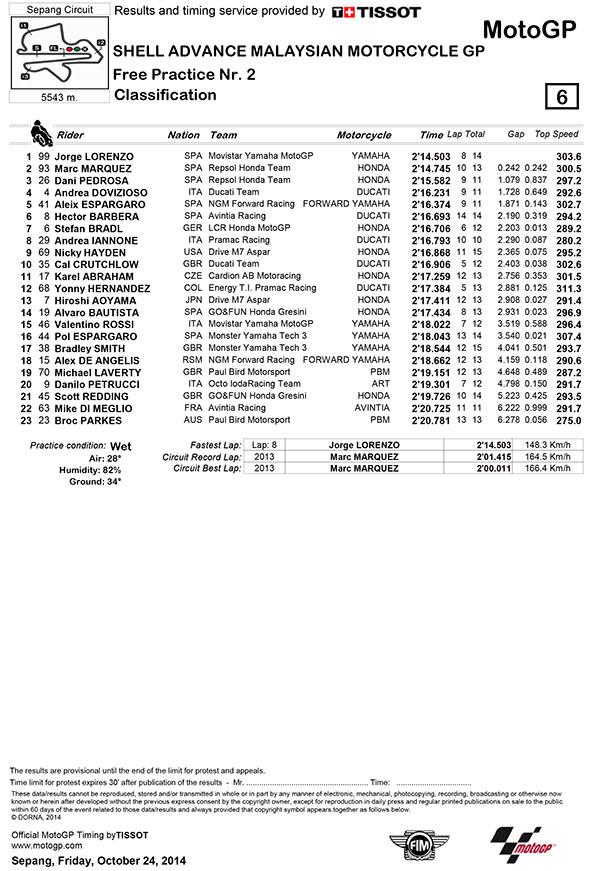