The yellow, number 46 flags will be waving long into the Misano evening, as Valentino Rossi secured a solid race win and became the first rider to score 5000 Championship points, after riding a superbly controlled race.

Marc Marquez, who by his own admission had struggled during qualifying, found himself following the Italian early on but struggling for pace and position. As he pushed his Honda for pace, wrestling to squeeze every last inch of power out of the machine he lost traction and slid - almost apologetically - to the floor. By the time he had managed to rescue the bike and restart around the track his race was effectively over; with him finally limping home in fifteenth.

With pole man Lorenzo never managing to find a response to Rossi’s commanding performance, a Yamaha one-two finish saw little consolation from Honda as Pedrosa continued his quiet challenge for the championship in third.

Bradley Smith on the Tech-3 Yamaha was the highest placed Brit in seventh. Cal Crutchlow struggling on his Ducati arrived in ninth and Scott Redding came home in thirteenth.

Speaking immeditately after the race Lorenzo was quick to congratulate his teammate. ‘Great race’, he said quietly, ‘you were very quick!’.

Rossi - naturally - was buoyant, ‘It was fantastic. To get the first victory of the season here in front of all of the fans is just great’. 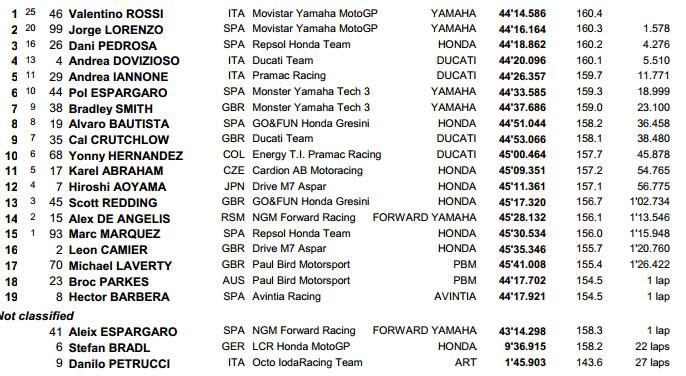