Stuart Easton has won the Macau Grand Prix on his comeback to the Chinese road race. The Scot won by over 14 seconds on the Rapid Solicitors PBM Kawasaki ZX10 from Michael Rutter (Milwaukee Yamaha) with Martin Jessopp (Riders Motorcycles BMW) in third.

The 31 year old Hawick racer, who won Macau three years in a row from 2008 until 2010, led today’s race from start to finish from pole position in his return to the Chinese road race after a three year absence.

“I’d planned to try and get away at the start and then set a comfortable pace and after that I rode to my pit boards.” he said afterwards.

“The times were slower when compared to what I have done in the past but we have struggled for grip all week. But my Metzeler tyres were perfect and I couldn’t have asked my team for anything more.”

“Stuart made it look easy today.” was eight times Macau winner Michael Rutter’s verdict. The Birmingham rider had a much tougher race after getting a poor start. He fought his way up into second on the Milwaukee Yamaha but on the closing laps he had to hold off strong challenges from Martin Jessopp, Gary Johnson (Quattro Plant Honda) and Lee Johnston (Pirtek Honda) to hold on to runner up spot.

“I hit a wall early on in the race trying to catch Stuart and I thought I was going too hard so I settled for second. But then I could hear the other boys behind me at the hairpin but I just managed to hold them off.”

Martin Jessopp was delighted to take third spot and his third Macau podium.

“It was a great battle on the last lap and they say that in road racing you have to hold a bit back but I don’t think any of us were holding anything back today!” he joked afterwards.

Last year’s winner Ian Hutchinson had a miserable Macau return after running straight on at Lisboa on the opening lap and then slipping off at Melcoo when he rejoined the action.

But the day belonged to Comeback Kid, Stuart Easton, whose superbly smooth and precise style saw him take an emphatic win on the BSB ZX 10 that he has campaigned all season for Paul Bird’s team. 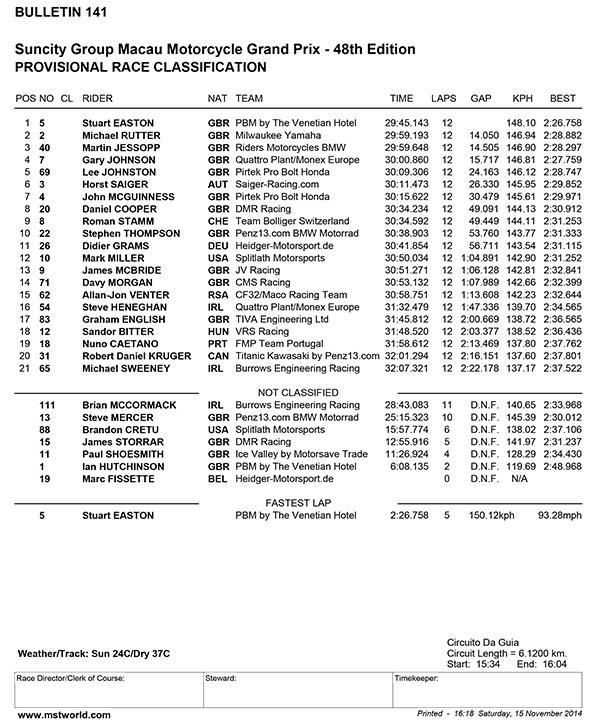