Following on from a race win in the wet at Assen last time out Jonathan Rea (Pata Honda World Superbike) fired in a strong Superpole lap at a blisteringly hot Imola to take his first pole of 2014 and only the fourth of his WSB career.

As the qualifying tyres arrived in the second of two Superpole contests Rea surprised everyone – even himself to a degree - with his lap of 1’46.289, which was outside the track best set by Tom Sykes (KRT) last season, a 1’45.981.

Chaz Davies was fourth on his factory Ducati, 0.389 from Rea, while Marco Melandri had to work hard his Aprilia factory bike around Imola to take fifth place.

Tom Sykes (KRT) was a disappointed sixth on the leading Kawasaki Racing Team bike after not being able to take enough advantage of his rear qualifying tyre but is still on the second row. His team-mate Loris Baz was seventh.

Leon Haslam (Pata Honda) survived a heavy crash in practice earlier in the day to go tenth, one up on Evo rider Leon Camier (BMW Motorrad Motorsport). Alex Lowes (Voltcom Suzuki) did not set a lap in Superpole 2, and therefore starts 12th off the grid for Sunday’s 19-lap races.

It was a game of chase the full Superbike in the first Superpole session, for most of the riders who had qualified from 11th to 20th place. The lone full WSB machine of Toni Elias (Red Devils Roma) had encountered electronics issues in the final free qualifying session that counted for qualifying, and he never made into the top 12. 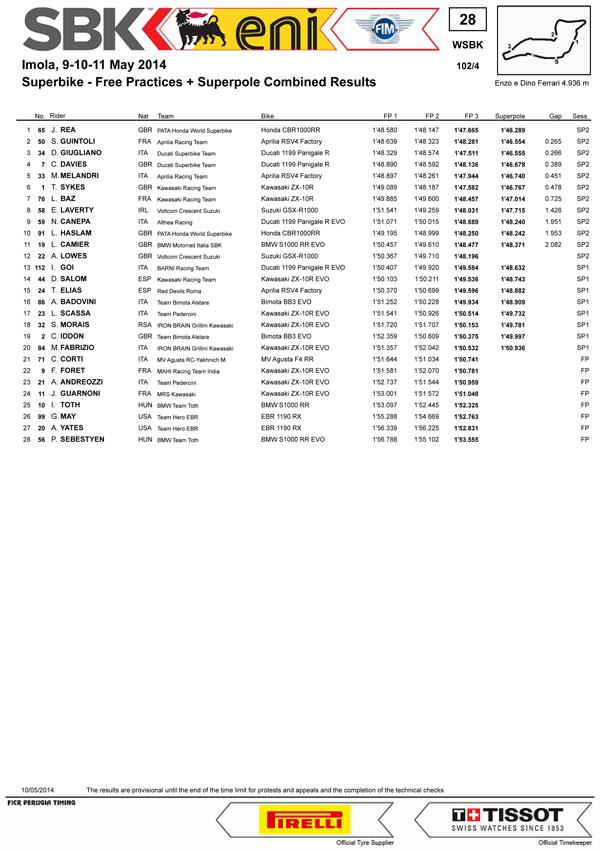