Lorenzo Zanetti has taken a home victory in the World Supersport race at Imola, taking his first ever win in the class as Pata Honda take back-to-back victories in the supersport class after Michael van der Mark’s Assen win.

Speaking afterwards, Zanotti said: “An unbelievable weeked for me. I’ve been strong all weekend, but it was my home race and I started under pressure and didn’t want to make a mistake. Andrea Antonelli, this win is for you.”

The young Dutchman was second at Imola, making for a brilliant morning’s work for the Pata Honda squad after Jonathan Rea’s WSB race one victory. Florian Marino was third, taking the final podium place and now sharing the championship lead with van der Mark.

Former BSB racer PJ Jacobsen had a good race to take fourth, his best ever finish in the class ahead of Robbie Rolfo.

Jack Kennedy was eleventh, after crashing out and rejoining early in the race, while Fraser Roberts only just missed out on the points in sixteenth.

However, Zanetti was lucky to take the win, being gifted the top spot after a clutch issue gave race leader Kenan Sofuoglu yet another DNF and further damaging his championship hopes. He was joined by Scotsman Kev Coghlan, who crashed out of the battle for third in the opening laps to leave Italy with zero points as well. 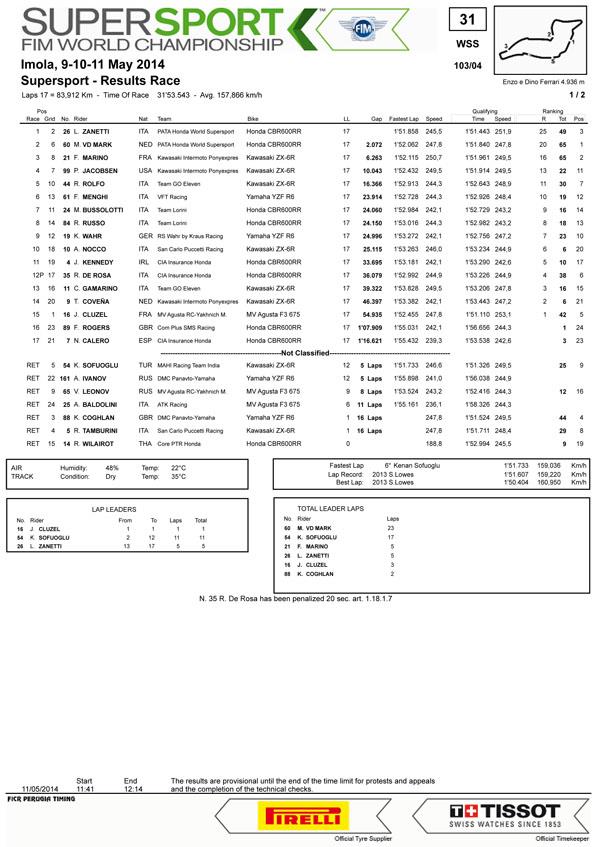