Tom Sykes secured a stunning victory in the opening WSB race at Donington Park after fighting back from 11th on lap one to secure victory. The reigning WSB champion looked to be struggling in the early laps and dropped down the field from his third row starting position.

He spent the first part of the race at the back of a group of Brits – Jonathan Rea, Leon Haslam and Chaz Davies while the front group ahead, pulled away. But with some determined passes he got to the front of his group before upping his pace on the clear track ahead of him to close in on the lead group.

Lapping over half a second a lap faster the factory Kawasaki man was soon embroiled in an intense battle with team-mate Loris Baz for the victory, which after a handful of hard passes went to Sykes.

He said: ““Yes, maybe that was the best race of my career. We had a problem on the first laps and I lost a lot of ground. I was in tenth or 11th position and very motivated to move back to the where I feel we should be. It was difficult to pass because a lot of guys were using their fresh Pirelli tyres the their full advantage and I had nothing in the pocket in the first laps but I found my rhythm and was able to make it to the front.”

He said: “I got a good start and I was really happy to lead a WSB race for the first time and at my home round. At the end of the race I struggled a bit, but I enjoyed it, we put on a good show and I feel that we are moving in the right direction.” 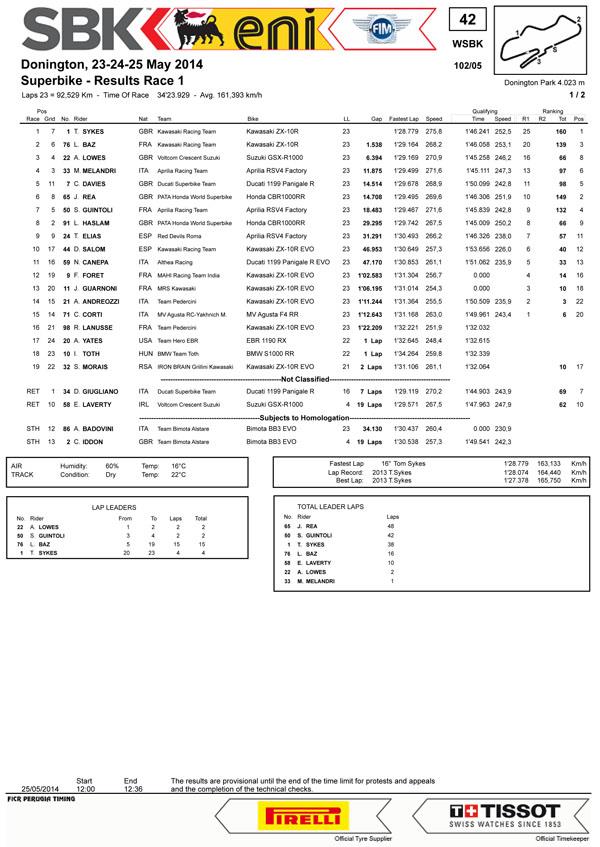