The Harley-Davidson V-Rod cruiser has been about since 2001, and the new Muscle is… is just another styling exercise to bolster what is arguably a tired range. The Muscle is essentially a reworked V-Rod with design touches (muscular, flowing lines) to front it up as a serious boulevard traffic light blaster. Except it isn’t that muscular – 12.25sec standing quarters anyone?

For the uninitiated, muscle bikes are large capacity machines dressed in street cruiser clothing and producing serious amounts of torque and power. The mixture of chrome, wide bars and tyres bolted to a long wheelbase chassis command huge road presence even though bold styling means they are often mistaken for asthmatic two-wheeled handbags. Big mistake!

The Porsche-designed 1246cc engine had a little work to ramp up the bottom end for this 2009 version but, even so, its claimed 85ftlb is down on competition from the Yamaha VMAX and Triumph Rocket III. Actual power delivery is a mystery. Investigate the bike’s spec and you’ll end up with zero because Harley doesn’t quote a bhp figure.

Harley-Davidson’s V-Rod range was 10-years-old in 2012 and to celebrate this milestone Harley reintroduced the Brilliant Silver Pearl colour first seen on the orginal V-Rod in 2002. This limited edition bike also carried the ‘10’ year logo on its engine cases as per all 2012 models of V-Rod (Night- Rod Special and Muscle).

Harley-Davidson’s Muscle could be so-called because the strange seating position of bum flat on the seat, forward set and high footpegs along with wide flat bars hurts the hip joints and the fleshy parts attached to them. With time the human body will adapt, so I’m informed. 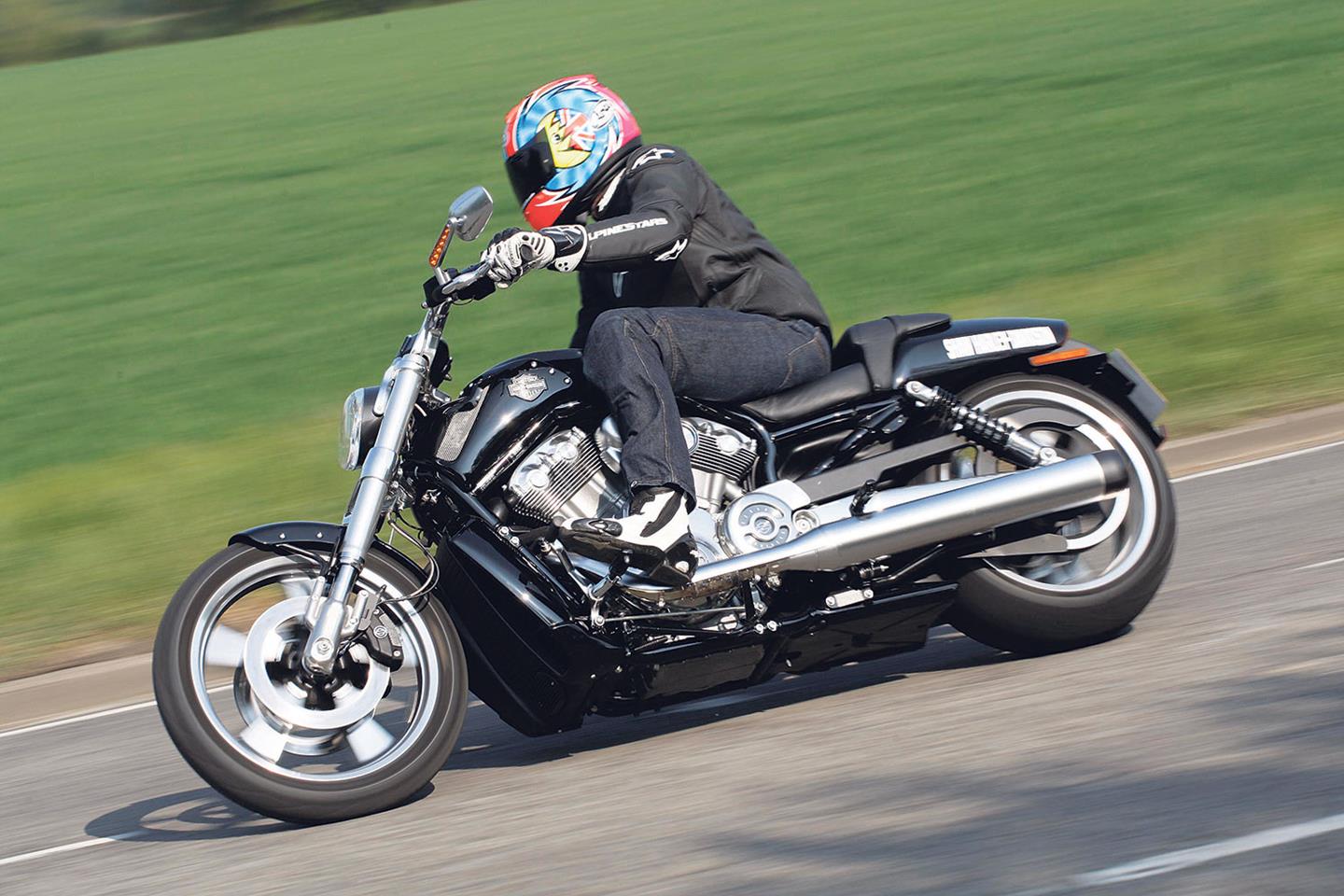 You have to remember the bike is a straight line performer and corners get in the way of the footpegs and exhausts. Short-legged people will find the bar position and stretch to the footpegs a hip-straining effort.

The length, weight and raked forks conspire to cause understeer through faster corners, but who cares when the sun is out, the roads are dry and you’re not in a hurry with denim cut off blowin’ in the wind…

A water-cooled V-twin with 120bhp and a house full of torque is not to be sniffed at. But when it’s anchored by 307kg of metals and plastics it is hard not to ask yourself where has all the go gone? Never mind. The engine is super smooth with a precise throttle delivery everywhere. And the gearbox isn’t too clunky. In all a muscle cruiser of the relaxed kind.

So what's it like to try and harness all of that power and torque in a straight line, top speed run? I took the bike to Bruntingthorpe airfield to find out.

Take it as read the water-cooled Harley lump is a happy chap and eager to put a smile on your face with a quick-revving engine and easy to shift gearbox. But for racing from the lights and lighting the rear tyre that seating position feels all wrong. It’s a long way to drag a supporting leg forwards and upwards with eyes focussed ahead, either on the two crows flitting about in the direction of aim, or the in-your-face tacho.

Blip the throttle; the expected response of rorty power is dismal. A heavily silenced exhaust dilutes any expectancy of pulling arms from sockets and neck snapping. Muscle? Not quite.

Fuel injection and modern ignition systems are good. Forget about clean running, just give me instant connection between throttle and tyre, which is what should happen. Except there’s a short in the connection. Getting perfect drive with little wheel spin and crisp take off is a bitch, with a capital B.

The clutch is light, slow to respond but doesn’t fade as you psyche yourself up. Remember where the right footpeg is placed; balance the bike with your right foot’s tippy toes, close visor and don’t forget not to breathe too hard – but don’t stop breathing. Here goes…

A genuine, dyno measured, 109bhp at the rear wheel is let loose under the guidelines of plan A: with 3000rpm showing on the tacho, let go of the clutch lever. The Muscle leaps forward then bogs. Bollocks. Start again. More revs equates to erratic wheelspin and smokin’ tyre. This is fun, but it’s a case of double boll…. Less revs more clutch slip and it’s a clean getaway but slow, so slow, and you can feel it. Try again.

Back to plan A. Only a slight slow of motion before the Muscle gets in its stride with 77.2ftlb of torque to drive it forward. Tucked forward while lifting booted foot back onto the right peg is bloody misery because speed is rising and second gear is calling.

60mph is racked up in 3.93secs. Another gear, but which one? Wind noise from naff all frontal protection is starting to interfere with senses. Adrenaline is surging because of man’s natural default of wanting to win. Another gear. Hips are now hurting like hell.

Those wide bars are now a tiller steering an oil tanker. The front end is getting lighter with forced air passing under it causing the front wheel to skip off bumps. The bars are starting to waggle. Only slightly, though. Tightening your grip against the strengthening windblast intensifies handlebar movement.

Another gear. It’s got to be top by now, should’ve counted them but thoughts are elsewhere. Ease off the grip on the bars and the front end calms down. Either that or the bike is settling on the front springs because acceleration is easing.

Engine power and consequently acceleration is dropping off. The speedometer figure is taking an age to crest 140mph. 145mph finally registers in 25.75secs; in true GPS measured speed it is only 140mph. "COME ON, FASTER," shouts the brain. Just as 150mph registers the 9000rpm rev limiter cuts in.

Absolutely no qualms here – part of the bike’s initial launch was a day at an American drag strip, where wooden-fingered journalists spent all day trying to kill tyres, clutches and other internal components to no avail. Every bike stayed the course without a problem.

The MCN reader owners' reviews don't mention any reliabilty issues either. If you own a V-Rod, why not write your own at the bottom if this page? 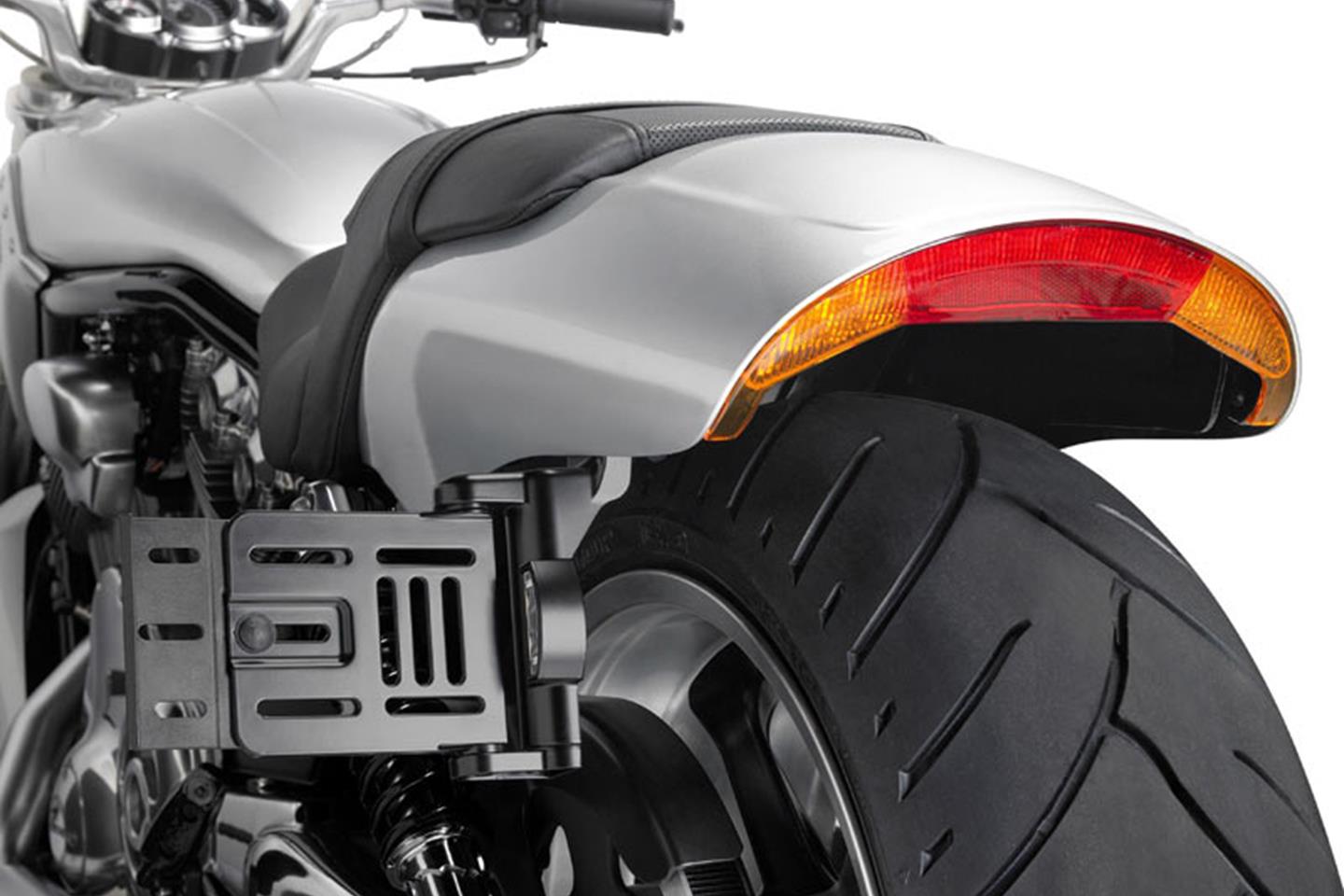 The majority of Harley-Davidsons retain a high resale value and the V-Rod range is no different – mainly because they aren’t a big seller in the UK where the preference is classic air-cooled H-D machinery.

Competition is on hand from the more comfortable and relaxed Triumph Rocket III or the completely unhinged Yamaha VMAX. You could also go for the more mainstream Ducati Diavel, the first generation of which came out in 2011. 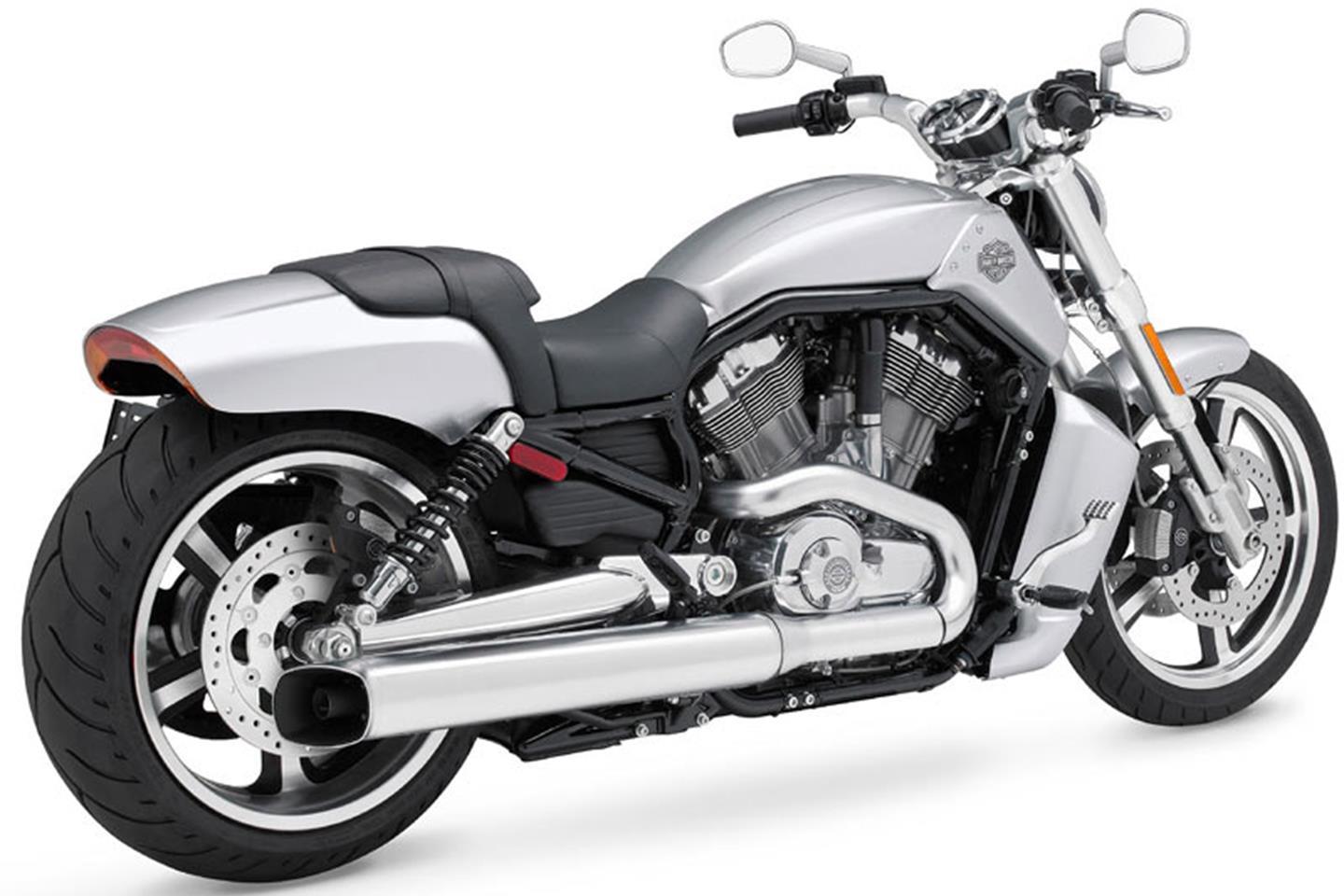 HARLEY-DAVIDSON V-ROD for sale with MCN

Bike of the day: Harley-Davidson V-Rod

Launched in 2001, the Harley-Davidson V-Rod was a concept initially shunned by purists of the day, thanks to the bike offering a thoroughly modern take on the Harley ownership experience. After decades of churning out cult relics, the V-Rod offered water cooling, more power than a Ducati 916, handli…

5 owners have reviewed their HARLEY-DAVIDSON V-ROD (2009 - 2018) and rated it in a number of areas. Read what they have to say and what they like and dislike about the bike below.

I never believe media reviews on anything. Someone else's preconceived opinion and negative bias. The Vrod offers character in bucketloads with more than enough real world performance on our heavily congested speed restricted pot holed roads.

Brake are phenomenal. Reminded me of my XJR1300 one finger stoppies. Ride quality is fine. No magic carpet but good enough.

Goes quicker than it has any right to for a V twin.

Never let me down. Ever. Solid , dependable and used in all weathers. Metalwork holding up well but slight alloy corrosion in the clutch lever area so might have given a 4 here.

It has everything it needs.

It's a mean looking machine. It is subtle about its growl and makes it statement more than expected. What a nice rear... when you see the crisp tail light passing by its free entertainment. The engine is perfectly balanced on the frame, and what a frame. The frame is not made like normal bikes, and neither was its engine. The compression ratio screams performance. The riding position is the main point to address when you ride. I am a normal build, 5ft11in and 200 pounds. I find the controls to be positioned nicely but the foot pegs need replacement. If your shorter you should get the shorter handle bars and foot controls option. I ride this bike as a commuter bike, 20 min ride one way on mostly freeways. I'm in CA so I must point out that I have engine guards and can split lanes on normal sized lanes.

The ABS system is fantastic. The front brakes are very affective.

Off the line I don't have to even try to pass everyone. Stock it does just under 3.6 seconds to 0-60. Since rider skill accounts for at least a solid second for 0-60 times, its a winner. Beautiful design that makes the engine stand out.

The engine will take a beating, and the frame. Many of the wires are inside metal tubes and well guarded. The fuel gauge is known to be faulty sometimes, but that factory warranty time (2 years) should have caught it by then and been replaced with a non faulty one. Solid road eating machine.

Rear tire and engine, say it all. Get the windshield option if you ride freeway. Get the backrest if you have a passenger you care about keeping on board.

My 2010 V-Rod Muscle looks gorgeous and is fun but relaxing to ride. Never had any mechanical problems but the frame is bubbling/rusting underneath, the chrome is literally peeling up and the paint has fingerprints coming to the surface in places. I've had 3 other Harleys in the past, a Sportster 883, Dyna Wide Glide and Fatboy... Never had any bodywork issues with those bikes. I think Harley must be cutting costs with the V-Rod series. There are hardly any custom parts you can get for the Muscle in particular. Very disappointing in that regard. Fun ride but not worth the price.

great cruiser, surprisingly good, looks and sounds great on Vance and Hines pipes, a remap really livens it up love it :)

Ok so MCN hates harley's but you can't give the equiptment 3 stars. There's tons of equip for the v-rod. If it was British built it would get 5.

Harley-Davidson V-Rod on the road