In simple terms the new Indian Pursuit is a Challenger bagger with an eye on serious touring, so has a top box, extra lower fairing panels and a taller screen. It also sits on new Fox rear shocks with electronically adjustable preload.

Indian held the press launch of this 416kg tourer in the French Alps, where it’s all switchback after switchback and not a motorway in sight. That may seem a daft thing to do on a bike made to trample big distances in supreme comfort - something we know it does brilliantly after we rode its Challenger sister in California a few years ago. But Indian wanted to prove it also has a surprising appetite for corners. That might not be a concern for riders who’d traditionally buy an American V-twin tourer like this, but if you’re coming from something sporty, you’re in for a treat.

Yes, the Indian will let you cover big miles in even bigger comfort and comes with every concession to luxury, although the dash could be better, but it also stops, goes and handles in a way a bike like this has no right to. Being able to do the sporty as well as the lazy lolloping makes the Indian Pursuit more than just a motorway cruiser it’s an unlikely performance bike, too.

⏱️ Join @Neevesy33 for #60secondswith the new Indian Pursuit. Well, actually it's 120 seconds but it's a very big bike! pic.twitter.com/MJEV2aW46O

A cast aluminium frame, upside forks, stickly Metzelers and four-piston radial Brembo monobloc calipers say everything about the Pursuit’s sporty pretentions, but the Pursuit is still plush when you want to kick back and take it easy.

You’re always aware of its size and bulk, especially at dribbling speeds, but once underway, even through town, the Indian has a surprising lightness to it and is easy to control. As ever, the back brake is you friend controlling a big beast like this, at any speed and the rear Brembo has lots of power and feel.

Here in the Alps the best bike for the job would undoubtedly be a supermoto, but once you’re in tune with the way it likes to be ridden and understand the limited amount of ground clearance available it flows through corners with speed and composure. It’s easy to see how this was the basis for their rapid, Daytona-winning King of Baggers racer in the US.

Although 39kg heavier than the Challenger, thanks to the extra box and bodywork the Pursuit manages to be sharper handling. That’s all down to its electronic rear preload that keeps the rear from sagging and slowing down the steering. Controlled via the dash, just tap in your weight and whether you’re carrying luggage or a pillion and off you go.

The Pursuit shares the Challenger’s ‘PowerPlus’ 1769cc liquid-cooled SOHC eight valve V-twin engine. It’s an unashamedly modern motor that’s makes 120bhp and 131lb-ft of torque and as happy being revved through the gears as it is cruising in top. It has oval throttle bodies, hydraulic tappets for lower maintenance costs and a rear cylinder that cuts at tickover to keep the heat down. It’s a smooth operator with few vibes, but still throbby enough to give you a nice dose of American V-twin character.

You get three riding modes (Rain, Standard and Sport) – each with different mapping, but Standard is all you need. The Sport mode’s throttle is too aggressive for low-speed manoeuvres and Rain far too docile. Lean sensitive traction control and ABS are also standard.

It’s not cheap, even with a PCP deal, but build quality is superb. MCN’s online owners’ reviews of all modern-day Indians are glowing, aside from the occasional report of corroding fixings.

A big, luxurious tourer like this, costing as much as an early 90s two-up, two- down, needs to be well equipped and the Pursuit doesn’t disappoint. Bikes coming to the UK will have the ‘Premium Package’ fitted, so come with a 200-watt stereo, heated seats and grips, cruise control, keyless ignition, tyre pressure sensors, a 12V charger and LEDs. It also has an electrically adjustable mid-height screen (taller than the Challenger’s), but it doesn’t lower enough for a clear view through corners and at speed the wind buffeting can be noisy.

Displays are a mix of analogue dials and an all-singing seven-inch colour touchscreen dash with Bluetooth connectively, Apple CarPlay and sat nav. They contain all the info and functions you’ll ever need, but they all glare in the sunshine. The main display is overly busy hard to read at a glance and a league away from the clean simplicity of the colour 10.25in dash you’ll find on the latest big Beemers.

If all that wasn’t enough there you can load the Pursuit up with accessories including extra speakers and storage, soft luggage, different screens and a cooling seat that draws hot air away from your derriere. 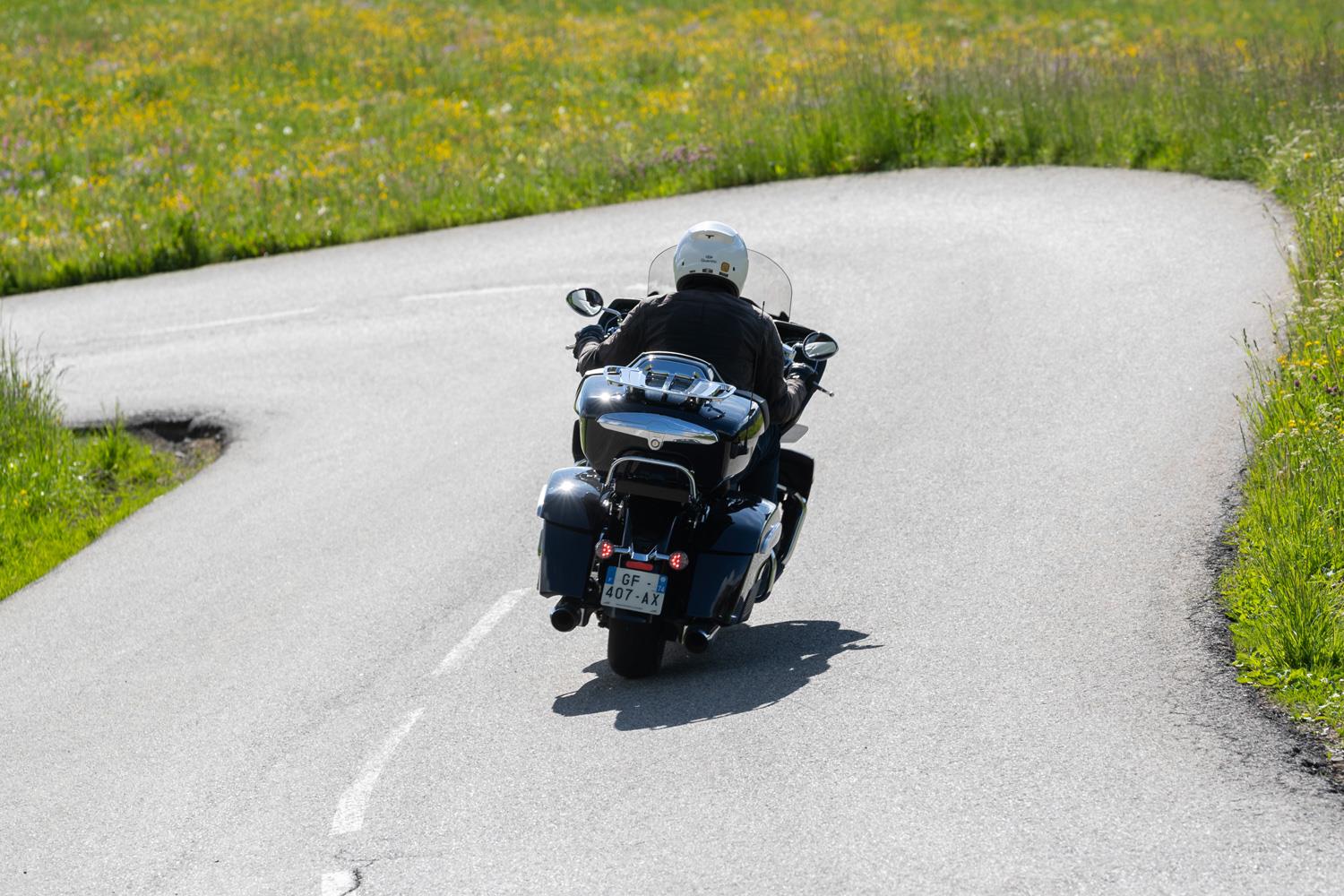 Back to top
Advertisement

Indian Pursuit handling well for something over 400kg