It may be a child of the 90s at heart, but even by today’s standards the third generation Suzuki Hayabusa feels like a spaceship.

We’re glad that Suzuki haven’t messed with its magic recipe too much. Styling is more evolution than revolution and it rides similarly, but the suspension upgrades deliver a deliciously supple ride and the engine’s extra grunt makes you forget all about the drop in peak power you’ll rarely use anyway.

Brakes are an improvement, but blunted by their electronics, the low-speed throttle action is snatchy and the riding position can be cramped for tall riders. Those small niggles aside the 2021 Suzuki Hayabusa is still a wonderous, one of a kind creation that remains the epitome of effortless speed.

Fully adjustable KYB forks and shocks might look the same on the outside but the internals have been reworked to give astonishing results. As you’d expect from such a heavy bike, it doesn’t respond well to being forced into corners, but if you finesse it from upright to full lean it’s hugely capable and sure-footed. It positively glides over bumps and it’s this sublime ride quality mixed with unflappable high-speed stability, reassuring weight and such creamy power delivery that makes it so effortlessly quick over fast terrain.

New Bridgestone S22 tyres still have a flat, 1990s 50-profile rear, compared to the balloon shaped rubber used on current superbikes, but they do a fine job. They warm up fast and have more than enough grip for the road…and when they don’t there’s a whole army of the latest six-axis IMU controlled electronics to help you out.

The 2007-20018 Hayabusa suffered with poor braking feel and performance and Suzuki have addressed the problem with bigger discs and Brembo Stylemas, first seen on the Ducati Panigale V4, but they don’t have the firm, reassuring bite we know they’re capable of. That’s more down to the electronic brake-by-wire system than the actual hardware. But you’d always use a foot-full of back brake on a long, heavy bike like this, so there’s never any heart in the mouth panic moments even stopping from high speed.

Uniquely long and low with lots of bike in front and behind you, riding the Busa is like piloting a hyper speed canoe. The riding position is the same as it ever was, with both pegs firmly set in the ‘90s and there isn’t a lot of legroom for taller riders, but the bars have been pulled 12mm closer to you. There’s less of a stretch to reach them now, but there’s still a fair amount of weight on your wrists, so in true sportsbike fashion, you’ll be propping yourself up with your left elbow on the tank to relief the pressure through towns and villages. Happily, cruise control is standard, to let you shake your right wrist off on the open road, too, but disappointingly heated grips are an optional extra.

Despite a host of new engine parts, the Hayabusa actually makes less peak power and torque than before. That may sound disappointing as you’re sitting calmy reading this, but out in the real-world, going flat stick on a Busa is still a lesson in brutality and hanging on for dear life.

Granted, you’ll feel the power flatten-off at the top, if you’re used to riding 200bhp-plus superbikes because its claimed 188bhp will be more like 170bhp-ish at the back wheel. But the big Suzuki isn’t about chasing big revs and instead, it’s all about leaving it sixth gear and using thick, meaty wodges of midrange torque to woosh you along. The Busa may have a sweet new gearbox and a peachy new up/down shifter, but unless you’re pulling away or stopping, you’ll rarely need to use it.

Suzuki claim a chunk more oomph between 5000-6000rpm over the old model and that’s exactly where you feel the sting of its punch on the road. Those revs might sound low on paper, but in top gear you’ll be traveling at over 100mph. With instant thrust only ever a millimetre of throttle away, the engine never feels flat at low revs like a superbike’s does after you’ve tasted its fruits, so you’re never chasing your next hit and riding ever faster, which instils a feeling of calmness to riding the Busa.

The richness of its power is what makes the Suzuki so special on the road and the previous 'peakier' model even made the supercharged Kawasaki H2 SX feel weak at low revs. Now there’s even more of the same and the new ride-by-wire is just as smooth as the old fuel injection once you get going, but it’s slightly glitchy from a closed throttle at low speed, compared to the best from Ducati, Triumph and BMW.

For 2021 the Hayabusa is crammed with more tech than would have ever been thought possible back when the original burst onto the scene in 1999. It has six riding modes (three pre-set, three custom), three power modes, 10 stage anti-wheelie and cornering traction control, three stage engine braking control, cornering ABS with front to rear linked brakes (not vice versa), rear wheel lift control a speed limiter and a hill hold system.

They all work nicely and are controlled via the switchgear and colour TFT display between the analogue dials, but aside from helping you when things get sticky, they do little to enhance the riding experience. It’s the machine and not the electronics that make the Busa.

You also get a three-stage launch control system. It limits the revs to either 3700rpm, 6000rpm, or 8000rpm, so all you have to do off the line is feed the clutch out and lean on whatever anti-wheelie and traction control you have or haven’t got dialled in at the time. It makes all the right MotoGP popping and banging noises, but ultimately, it’s easier to get a faster getaway manually balancing the clutch and revs.

Suzuki say they looked at different engine configurations for the new Busa and actually tried six cylinders, turbos and more cubes during development, but at the end of it they stuck with their trusty 1340cc inline four. It’s proved to be right choice from a dynamic point of view, but it is a shame they weren’t more adventurous, just for the craziness of it.

It their quest for extra grunt and to satisfy Euro5 rules, the motor has a new cylinder head, cams, cam tensioner, valve springs, crank, conrods, pistons, gearbox, slip and assist clutch and radiator. Throttle bodies have a new twin injector design, but they’re smaller (44mm to 43mm diameter) and 12mm longer. The airbox is 1.2 litres bigger and ram air ducts are reshaped. The new exhaust system is 2kg lighter has an elliptical cat in the collector box and a round one in each of its twin cans, which despite still looking huge, are actually two-litres smaller. Headers now have a link pipe between cylinders 1 and 4 as well as 2 and 3.

Big Suzuki engines have always been bomb-proof and a favourite in the drag and classic superbike racing world, but it’s now more durable. A new ride-by-wire system and six-axis IMU controls everything from the throttle to cruise control and rider aids.

…but more time at the pumps

Despite its Euro 5 stamp of approval Suzuki claims a drop in fuel economy from 50mpg to 42mpg and a theoretical 176-mile tank range.

MCN online owners’ reviews for the previous model are glowing when it comes to reliability and durability, but some finishes are thin and prone to stone chips and corrosion if not looked after.

The latest version promises more of the same with lots of thoughtful attention to detail and with similar electronics to the tried and tested Suzuki GSX-R1000. You can buy a Hayabusa with complete confidence.

At £16,499 at its launch, the 2021 Suzuki Hayabusa costs around the same as a similarly spec’d base model superbike, but it no longer has any direct hyper bike rivals, with the possible exception of the more touring-focussed and slightly cheaper standard, no-frills Kawasaki H2 SX.

Suzuki have moved the game on with the 2021 Hayabusa. Not only does it have new styling and LED lights it comes with a full set of electronic rider aids, fully adjustable suspension and fancy brake calipers.

Although the iconic analogue clocks and speedo happily remain, we wish the speedo still went up to the original Hayabusa’s 220mph instead of its more realistic 180mph. A multi-function colour TFT nestles between the dials. A full range of official performance, touring and styling options are available and with the Busa being around for over two decades there’s no shortage of aftermarket and tuning accessories available from specialists.

Take a look at the previous generation Suzuki Hayabusa clocks in this onboard video: 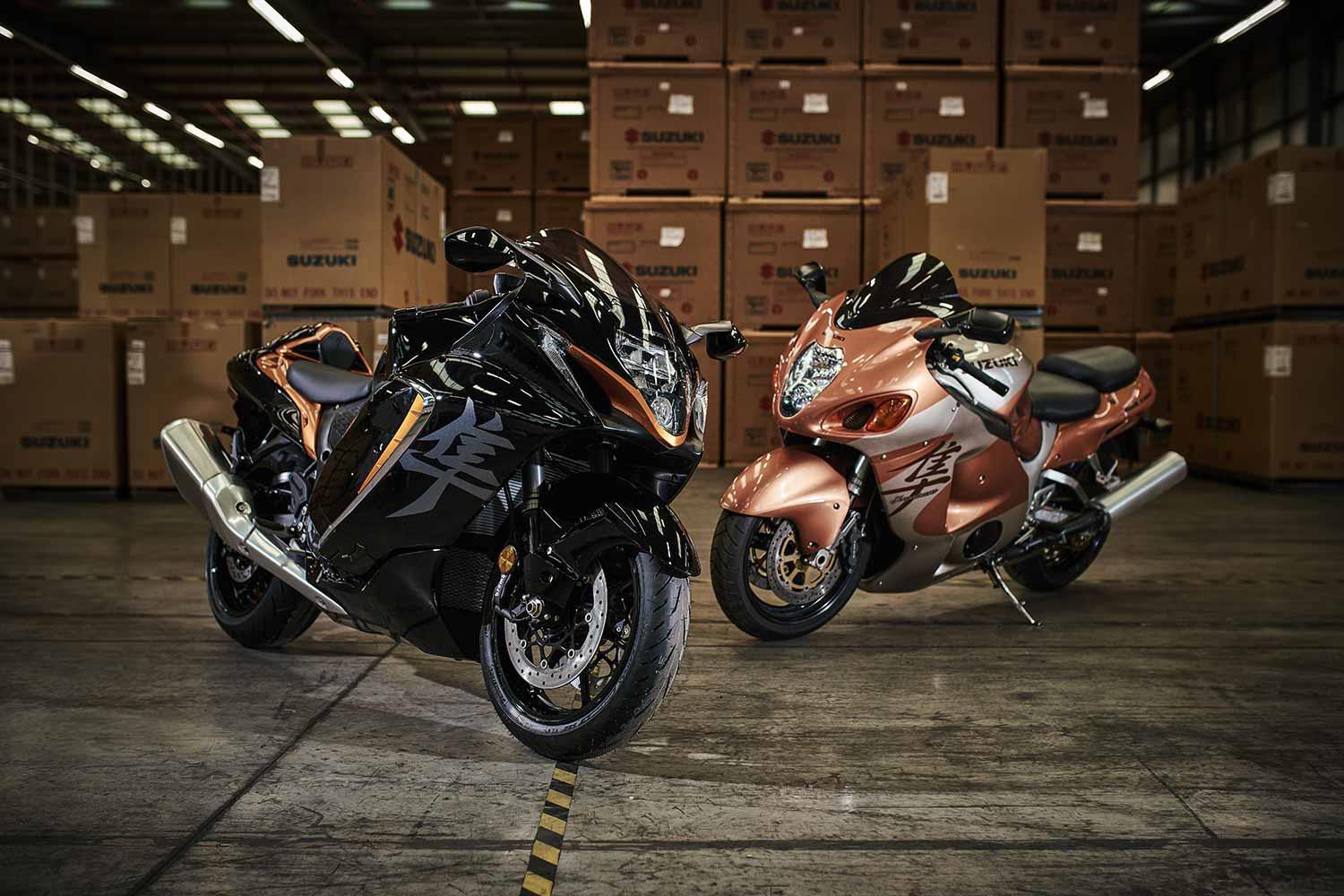 Watch our video review of the updated 2013 Suzuki Hayabusa:

No other versions available.

Pulling a stand-up wheelie on the Suzuki Hayabusa

A front view of the 2021 Suzuki Hayabusa

The Suzuki Hayabusa's clocks are a mixture of analogue and TFT

Cornering on the road on the 2021 Suzuki Hayabusa

Leaning into a right-hand bend on the 2021 Suzuki Hayabusa

Performing a wheelie on the Suzuki Hayabusa

A static view of the black 2021 Suzuki Hayabusa

Tucked in aboard the 2021 Suzuki Hayabusa

The latest Hayabusa alongside the original 1999 model

The Suzuki Hayabusa is all about going fast

Preparing for launch on the 2021 Suzuki Hayabusa

The Suzuki Hayabusa is available in multiple colours

Engine components on the 2021 Suzuki Hayabusa

Tucked in for a top speed run on the dyno

Pulling away on the 2021 Suzuki Hayabusa

Accelerating on the 2021 Suzuki Hayabusa

A high-speed wheelie on the 2021 Suzuki Hayabusa