Ignore the ‘adventure sports’ tag attached by journalists with an unhealthy desire to pigeonhole. Also disregard any snooty view that it’s ‘only’ a middleweight. Yamaha’s Tracer 900 is actually a proper, wholesome, old-fashioned all-rounder – a sensibly priced large-capacity bike with the performance, handling, comfort, manners and practicality to make a ruddy good fist of pretty much anything you ask. A machine worthy of the old UJM (universal Japanese motorcycle) tag.

The Tracer lacks the tech and glitz of rivals such as the BMW F900XR and Ducati Multistrada 950, though in reality you don’t miss it (there’s a higher-spec Tracer 900GT if you really must have a few more extras). Instead, the 847cc triple impresses with its feel, dynamic and mechanical bits, rather than bolt-on gubbins, flashing lights and buttons.

I’m not bothered about being unable to select the highlight colours on the dash, or a lack of customisable riding modes that I’d never use anyway. The bits that should really matter on an all-round bike – engine, chassis, ride quality, comfort, weather protection, and crucially rider engagement – are all very good, if not excellent (and where the Yamaha does slip behind pricier rivals it’s close enough not to matter). The Tracer also has a light-hearted air and feeling of fun that competition such as the serious Ducati, straightlaced BMW and mildly austere Triumph Tiger 900 don’t share. And bikes should be fun: it’s why most of us probably started riding.

The Tracer’s also great value. At less than ten grand on-the-road the spirited triple was up to £4000 cheaper than some direct rivals; now, with the introduction of a much-revised model for 2021, this version makes a sound used investment.

What a remarkable all-round package.

There’s a lightness to the way the Tracer handles. It feels fun and somehow light-hearted in the sort of way the original Fazer 600 did. Only with better suspension.

Its chassis isn’t quite as nimble in town as the BMW F900XR and doesn’t have the floaty, sumptuous, semi-active ride of the Ducati Multistrada 950 S (but then it doesn’t have its price tag either). This doesn’t mean the Tracer’s flawed, though. Far from it. It turns readily and delivers easy, fluid, composed and almost sporty handling. Chassis balance is better than the naked MT-09 on which it’s based, too – it just seems to work well regardless of where you’re riding and what you’re cracking on with. And cracking on comes easily, the 900 giving great confidence, encouraging spirited use and feeling better the faster you go.

The rear shock can get a tad out of its depth when really tramping on, but you need to be riding like you’re Dean Harrison on a hot TT lap for it to be an issue. The only other slight blemish to the Tracer’s gloss is that slippery roads can make the chassis feel a bit loose. The standard tyres play a big part. Although fine in the dry they’re too easily overwhelmed by the triple’s torque in the damp; feel evaporates and confidence reduces.

You get a sense of sitting ‘on’ the Yamaha, not ‘in’. This makes the Tracer feel more like a ‘normal’ road bike, rather than a dirt refugee as with more knobbly high-rise rivals. And comfort is very good.

No big-brand logos slapped on the calipers, and no black boxes allowing a big lever grab at full lean. However, there’s little to criticise about the brake set-up.

It’s the three-cylinder motor that makes the biggest and longest-lasting impression. Grumbling, bubbling, whining, the 847cc triple is surely one of the finest road units ever created. Crisp to respond and grunty low-down, it surges in the midrange, snaps through gears like an overgrown enduro bike and soars to its top end. With a claimed 113bhp it’s on a par with opposing machines, but the Tracer feels fittest.

Whether it’s gurgling and pulling cleanly in town, using its rich midrange for effortless open-road overtakes or purring smoothly on a motorway, the motor has the flexibility and performance to rival other bikes – and is always superb. It can behave like a subtle pussycat or fire out wheelies with equal ease. All the proof anyone could need that you really don’t need a 160bhp monster.

There are three fuel maps to fiddle with. ‘Standard’ is the best, mind; flicking to ‘A’ makes the throttle a smidge too sharp (like the original snappy MT-09 was) and ‘B’ makes it a little too soft.

There are lighter clutches and slightly slicker gearboxes on newer machinery, however there’s nothing amiss with gear selection. Just remember to use the clutch as there’s no quickshifter (the pricier higher-spec GT version has one, but for up-shifts only).

Yamaha really ramped up their quality and finish about 15 years ago, and the 900 is well made and presented. Though there are nicer details and finer components on more expensive rival bikes, the Tracer doesn’t have anything that screams ‘budget’ despite the attractive price tag.

It’s not just a great engine to use but also one that’s extremely reliable. There are examples that have done well over 100,000 miles without issue. Valve clearance checks are at 24,000 miles, so on an averagely used bike make sure it’s not being sold to avoid the looming cost.

Corrosion can bite its way into fasteners and a few bits of the running gear, and the exhaust soon looks scruffy. Some bits of the bodywork are a bit flimsy and can develop rattles with miles. Make sure the grab-and-adjust screen stays in position.

Basic spec isn’t high – you don’t get heated grips, electric screen or other toys. There are more gizmos and widgets on a Triumph Tiger 800 XR or Multistrada 950 S.

You’ll also pay a lot more for the competition, though. The Tracer doesn’t have the flashiest spec, but it was very keenly priced when current and now great value used – for a given amount you get a newer and/or better Tracer than a rival. And let’s not forget that the core bike is excellent.

Getting cover for your Tracer 900 shouldn’t be too traumatic. It’s insurance group 13, which is the same as a BMW F900XR, and a group lower than a Triumph Tiger 800/900 or Ducati Multistrada 950.

Normal, fairly brisk, mixed-route use returns a 49mpg average. This is identical to rival machines and means nearly 195 miles from the 18-litre tank. Economy gets up towards 60mpg on long motorway rides. Major service interval with valve-clearance check is at 24,000 miles, and fairly easy engine access means it’s not as expensive as some bikes. Tyres are the common 120/70 ZR17 front and 180/55 ZR17 rear, meaning lots of choice and fitments to suit all budgets. The triple isn’t too greedy with rubber and the bike feels best on sports-touring tyres, which should last well.

Yamaha didn’t adorn the Tracer 900 with many fripperies. It has adjustable-yet-basic traction control and ABS, three fuel maps to choose from, and a screen that you have to grab and yank to adjust. Lovers of colour displays, light-up switchgear and umpteen-level traction control won’t be overwhelmed.

This doesn’t mean the Tracer isn’t well appointed, though. The dash (taken from the Super Ténéré) has ample information and is easy to read, and it’s controlled from multi-function switchgear (swiped from the FJR1300). The seat has two heights, pillions get a proper seat and solid well-placed handles, and there are integral mounts for accessory luggage. It has hand guards, a 12v power outlet and a centrestand as well, plus very good headlight and mirrors.

YAMAHA TRACER 900 for sale with MCN 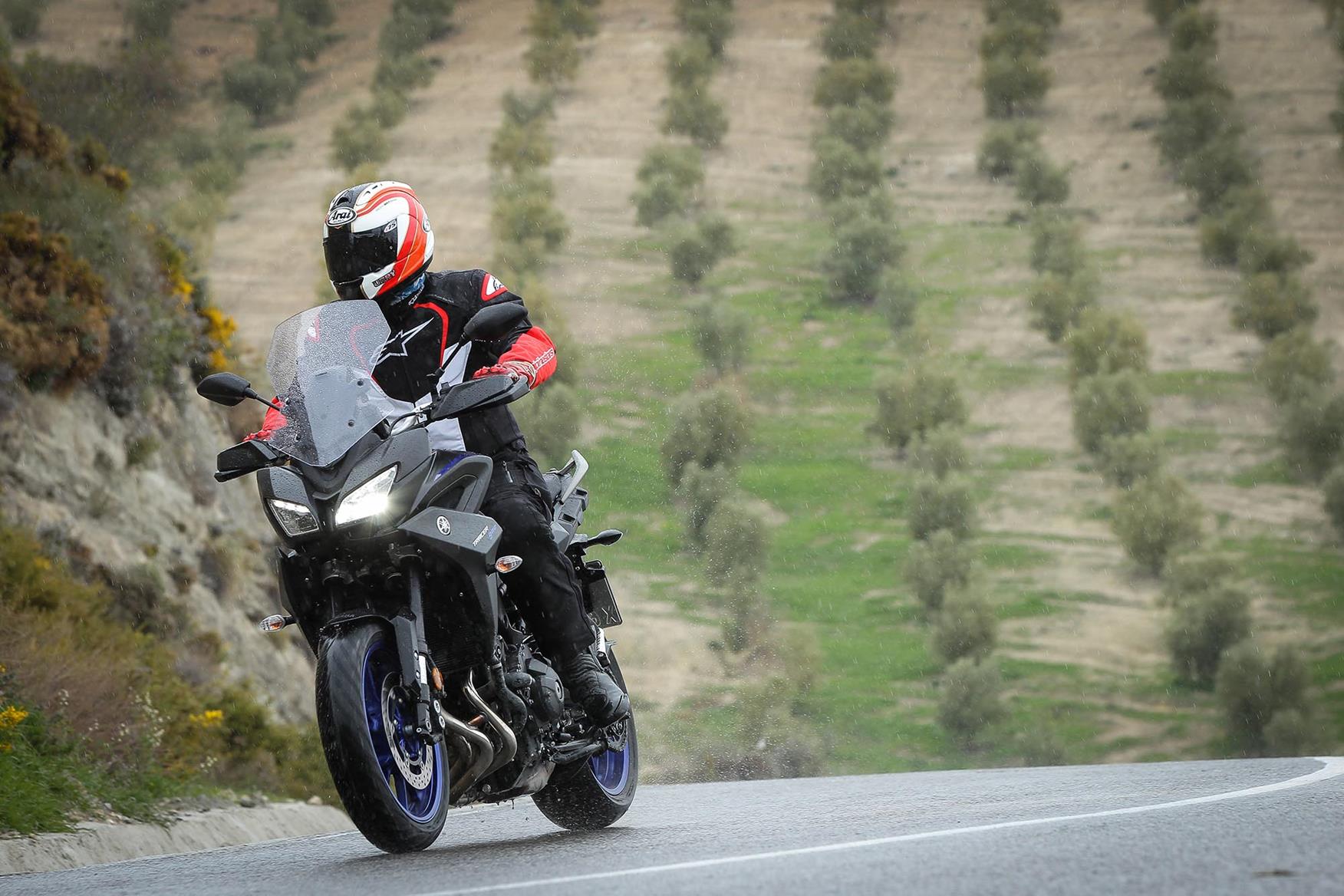 Other versions of this motorbike include the Yamaha Tracer 900GT, which costs £10,792 and has a TFT dash, colour-matched panniers, heated grips, cruise control and upgraded suspension.

4 owners have reviewed their YAMAHA TRACER 900 (2018 - 2020) and rated it in a number of areas. Read what they have to say and what they like and dislike about the bike below.

Very pleased with the bike. I have done 4000 miles so far problem free. The longride I have done was 318 miles so far. Only passed my test 9 months ago and I test rode a couple of other bikes before buying this one.

Buying experience: Bought it from Raceways at Fleetwood and it was a no hassle very easy sale. They are such a plesure to deal with

Wonderful do it all sportbike hidden in an adventure-ish costume.

Ride quality is very good, but it is sprung for a rather small human. Brakes are also good, they are old R1 brakes. I swapped to HH pads and braided lines and now it stops like a proper sportbike.

I wish I could give this thing more stars than 5... the CP3 engine is a true gem. Gobs of midrange torque and a wonderful top end rush to just short of redline. Even in stock form it makes fantastic sounds that I just can’t get enough of, this engine truly makes this bike and for that matter this whole series of bikes. It’s just as happy putting down the motorway as it is thrashing it on a backroad.

The only complaint I have is they put the absolute lowest quality chain they could find on this thing. Cleaned and lubed regularly and links are starting to stick and stretch is getting excessive at only 10k miles.

GT version is very well equipped, heated grips work fantastic. I never tire of looking at the TFT dash... I honestly think it looks even better than the new Tracer 9 dual dash set up. Yamaha accessory heated seat is very welcome on cold mornings. 12V power outlet right in front of the bars is great for charging my phone on the way home. The factory saddle bags are a little tight as they won’t fit a full face helmet, but the narrow width makes squeezing through traffic much easier. Only huge negative with this bike is the windscreen, if you are shorter it may not be an issue, I’m 6’5” and it seems to direct all the turbulent air directly at my head no matter the screen position. Switched to a sport screen for the summer and problem is solved... still working out a winter option.

Buying experience: Bought from a dealer in New Jersey near Atlantic City... they are scumbags, but I was able to get it for $12,000 Freedom units out the door.

Best feature for me is the engine very closely followed by leg room. Only bad feature is the screen.

Finally a bike I can ride for a long time without the old knees playing up. 35" inside leg and one of a few bikes that is actually comfy for a tall, fat bloke. The screen however is pure dung and that is my only fault regards this bike.

With the additional improvements this model is bar far a better bike than the previous generation. As far as preload only on the back. If MCN would've opened their eyes they would have noticed there's rebound on the rear shock aswell........ The suspension is perfectly fine unless you are going for it then you notice it needs better damping in the front/rear but I've kept up with most with out issues. My only two real gripes are firstly the mirrors. They need to stick out more and the nut to tighten the stock is an odd size and none of my sockets will fit. Second gripe is the stock windscreen is a joke. It make takes all the road noise and funnels as right to your ears. I've solved this my buying a puig sport racing screen. I'd certainly recommend a tracer for sure and in would happily buy one again

Yamaha Tracer 900 on the road.