Say ‘hello’ to the new supercharged Kawasaki Ninja H2 SX, the bike which, due to a raft of revisions including being the first Japanese machine to adopt Bosch’s advanced radar-guided electronics, is, Kawasaki says ‘the most comprehensively specified sports-tourer ever created’.

Already boasting 200 blower-driven bhp, the H2 SX, first introduced in 2018, along with its even higher spec SE brother, boasts a catalogue of updates for 2022.

The highlight of these is the new radar-guided electronics but there’s also a more sophisticated TFT dash, new front fairing to house both the forward radar sensor and new display, revised ergonomics, sophisticated keyless ignition, uprated brakes and more.

The Bosch-developed ARAS (Advanced Rider Aid System) radar system employs not one but TWO radar sensors front and aft which give both the SX and SE an array of new electronic aids including Adaptive Cruise Control (ACC), Forward Collision Warning (FCW) and Blind Spot Detection (BSD) systems. On top of that there is also a new Vehicle Hold Assist function and Emergency Stop Signal.

The new dash is a large, 6.5in, full-colour TFT display which is compatible with Kawasaki’s new smartphone-based infotainment app, ‘Kawasaki SPIN’, its new keyless ignition system (KIPASS) and its new Tyre Pressure Monitoring System (TPMS – had enough new acronyms yet?).

There’s a new front fairing cowling to house both dash and radar sensor which is also styled to be more reminiscent of the Ninja H2 sportsbike and come complete with historic ‘River Mark’ badge while both rider and passenger seats are now wider and more comfortable.

Elsewhere, the monster supercharged motor gets mods including new cam timing and a larger exhaust to get through Euro5 while the brakes are uprated with a new Brembo radial mount master cylinder.

Other new additions include now standard heated grips across all models and a USB power socket under the seat.

As well as the SX, Kawasaki is also offering a higher spec SE version as first introduced in 2019. As before, the SE has all the features of the SX but also semi-active, Skyhook-driven suspension called KECS (Kawasaki Electronic Control Suspension), uprated Brembo Stylema brake calipers and has slightly different paint. 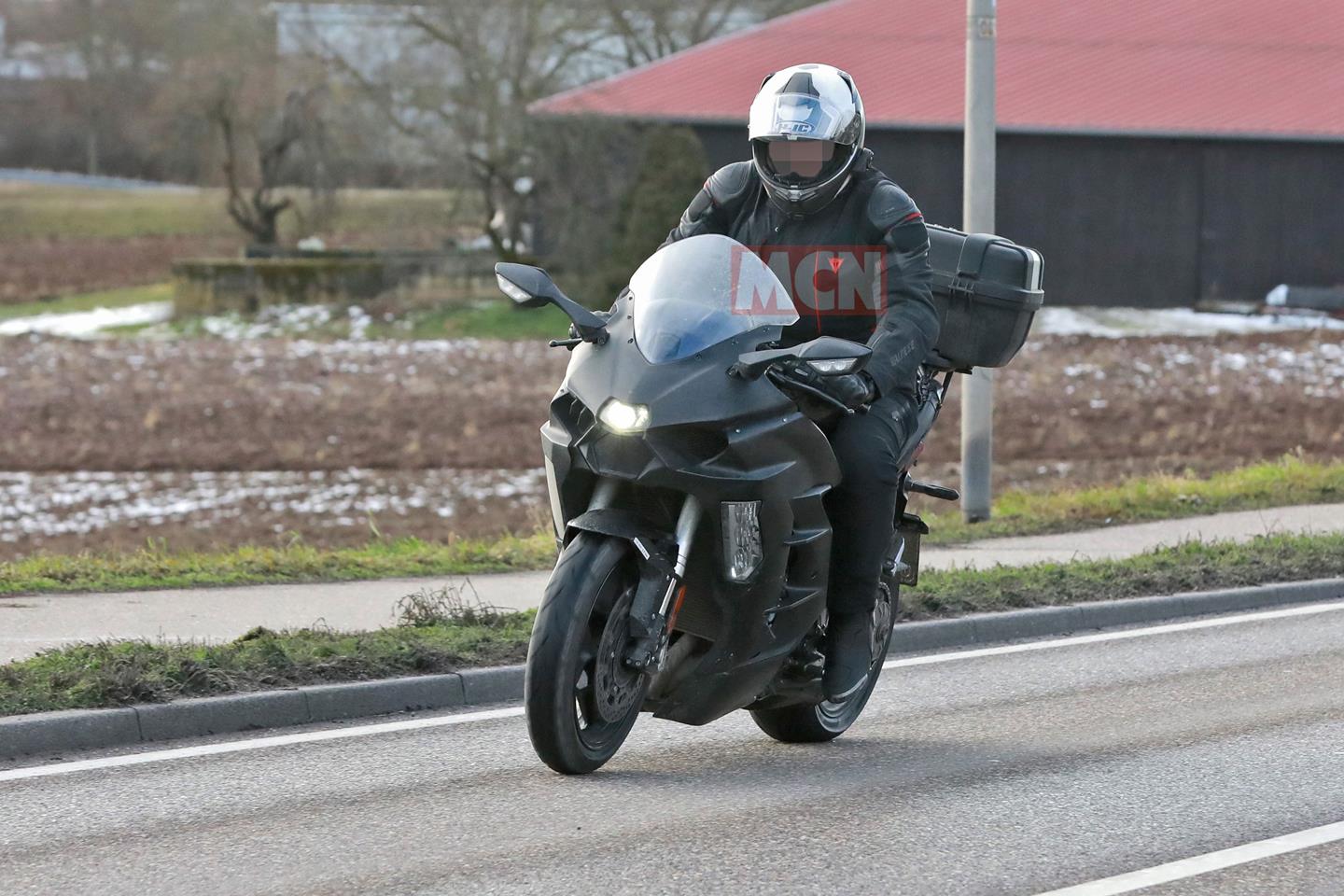 Spyshots have emerged that show Kawasaki testing a new H2 SX SE+ that’s packed to the rafters with new tech.

The H2 SX stole the sports touring show when it was first unveiled at the end of 2017 but the tech game has moved on considerably since. However Kawasaki don’t seem content with catching up with everyone else – it looks like they’re going on the attack.

Looking at the front of the bike, it’s clear there’s a lot going on. Tucked away inside the fairing is a block that appears to be for a radar unit. Kawasaki have already admitted they have teamed up with Bosch to outfit their bikes with cruise control radar and it appears the H2 SX is the first one to get the upgrade.

If you’re not familiar with the system, the sensor is able to detect vehicles up ahead when you’re cruising along the motorway and slow the bike down if needed. Once the vehicle has gone, the bike senses your path it clear and returns to your previous speed. What is arguably more interesting, is the little camera hidden behind the screen.

Kawasaki have previously applied for a patent for a camera system that scans the road ahead to prepare the bike’s electronics for what’s to come. On the patent they used the H2 SX as the example and it appears we may now be getting the fruits of their work. 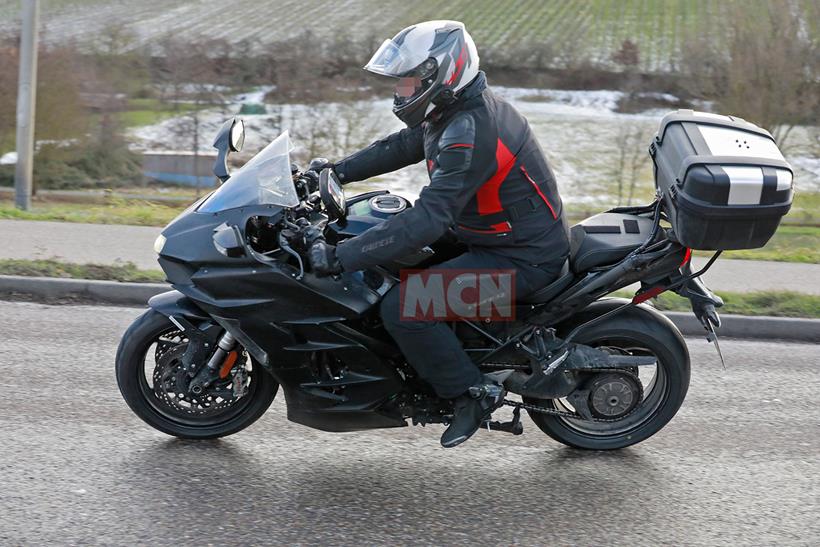 The patent describes the system as using a camera, along with onboard GPS, to look out for things the rider will need to react to. For instance, if the camera see’s there’s a corner in the distance, the GPS shows that it’s a hairpin and the bike knows it’s travelling quickly, the bike can predict that some heavy braking is about to take place.

In preparation for that the bike could stiffen up the suspension ready for braking and then accelerating. It could also ease off the throttle response, so the tyre doesn’t try to break traction on the way out of the second gear corner. It’s pretty Tomorrow’s World stuff but the technology clearly exists.

In the patent, the system relies on an in-built navigation system for the bike and lo and behold, the bike in the spyshots is sporting a giant full-colour TFT dash instead of the analogue/TFT mix of the old model.

Given that Kawasaki have already said the existing bike is not getting a Euro5 update, we don’t expect to see this until much later in 2021. All this tech won’t come cheap either; the current H2 SX SE+ is £21,999 so expect a fully loaded bike to be nearer £24,000.

Keep an eye on MCN for all the latest Kawasaki range news as we get it.