It would be easy to be cynical about the Triumph Thunderbird Storm. Its route of taking an existing cruiser model and spinning off a pared-down, mean and moody, all-black, ‘hot rod’-styled variant is a well-trodden one.

In recent years there have been Harley-Davidson Nightsters, Victory 8-Balls, Honda’s Black Spirit, even Kawasaki’s VN900 Custom, so the Storm is not so much a case of Triumph jumping on the bandwagon as shouting ‘Room for one more?’ and squeezing onboard among everyone else.

Riding it, however, reveals the new Storm to be pleasingly more than just AN Other fashion victim. Hinckley has become particularly adept recently at delivering well thought-out and crisply-executed machines that are both thoroughly developed and wanting for little. And the Storm, although developed from an existing model – the 1600 Thunderbird – is the latest example of this.

So, aside from predictable black paint and metal finishes plus subtly minimalistic styling (the Storm boasts more aggressive, flat bars and extended risers as well as chic clear glass indicators compared to the stock Thunderbird) Triumph has gone the extra yard by giving it a completely different headlamp arrangement, more performance and a host of neat detail touches.

Blackness aside, it’s the Storm’s twin-beam headlamp which visually distances it from the stock Thunderbird and reminds you of its Rocket III Roadster big brother – no bad thing in itself when you’re after an image that’ll strike consternation throughout suburbia.

But the Storm’s added performance, courtesy of using the Thunderbird’s optional 1700cc big-bore kit which delivers an extra 12bhp and a healthy wodge of added grunt means the Storm has the extra go to match its hot-rod image. That’s something that can’t be said of the Nightsters and Black Spirits of this world.

On the one hand the Storm is better ‘hot-rod variant’ than most, being both thoroughly done in terms of cosmetics and performance. By doing so, it offers a tempting, ‘bad boy’ alternative to the stock Thunderbird which, good though it is, has always been a bit too ‘vanilla’ for my tastes.

On the other, the Storm plugs a useful gap in Triumph’s range. In terms of how it looks, how it goes and how it feels, it truly is a ‘junior Rocket III’. So, the standard Thunderbird’s spec and manners appealed, but not it’s style, here’s the solution. And if you were tempted by the Rocket III’s poke and pose, but not its bulk and brawn, the Storm could be for you, too.

From the saddle, the Storm is pleasing, effective and surprisingly unthreatening to ride. While the rider’s-eye view is all bad-attitude gloss black, once levered off its side-stand and prodded into first gear the Storm is refreshingly light and welcoming.

The ergonomics are natural; the clutch, gearchange and throttle are light and crisp; and the pick-up from the big parallel-twin motor meaty and instant without being fierce. It’ll rev-on to a 7500rpm redline, at which point it starts to sound meaty enough too, but there’s no real need. Instead, it’s all about low and mid-range urge – and there’s more than enough of it to satisfy.

The handling feels even better than the stock Thunderbird – a big improvement on the class convention. The suspension, like most Triumphs, is well set up and the brakes are excellent.

The whole plot is taut enough to pleasingly swing through a series of country bends. It’s no sports bike, of course – the slow steering and sheer bulk mean that corners have to be planned and steady – but it’s more fun than most cruisers when you want to get hustling along.

In fact the Storm, despite its sheer size and bulk, only ever becomes a handful during dead slow manoeuvring, when there’s no getting away from the fact this is a big, hefty bike. But it’s nothing to get unduly concerned about, either.

Comfort and all-round useability is its forte. Its seat is well padded and the bars and pegs set to be acceptable for a tank’s worth of riding time. A decent, all-round cruiser with an extra helping of menace. Whether that makes the Storm a true hot rod, though, is a different matter…

You probably expect a true hot rod to have a big, beefy V-twin engine and you’d be right in thinking the Triumph’s parallel twin has its work cut-out to keep up. But there’s an authenticity here, too, although it’s British rather than American authenticity.

Look at the T-Bird engine and think ‘Bonneville’ – if it wasn’t for the ugliness of the rad, it could so easily be mistaken for an air-cooled lump.

The Storm’s added performance, courtesy of using the Thunderbird’s optional 1700cc big bore kit - delivering 12 more bhp and a healthy wodge of added grunt - means it has the extra go to match its hot rod image. 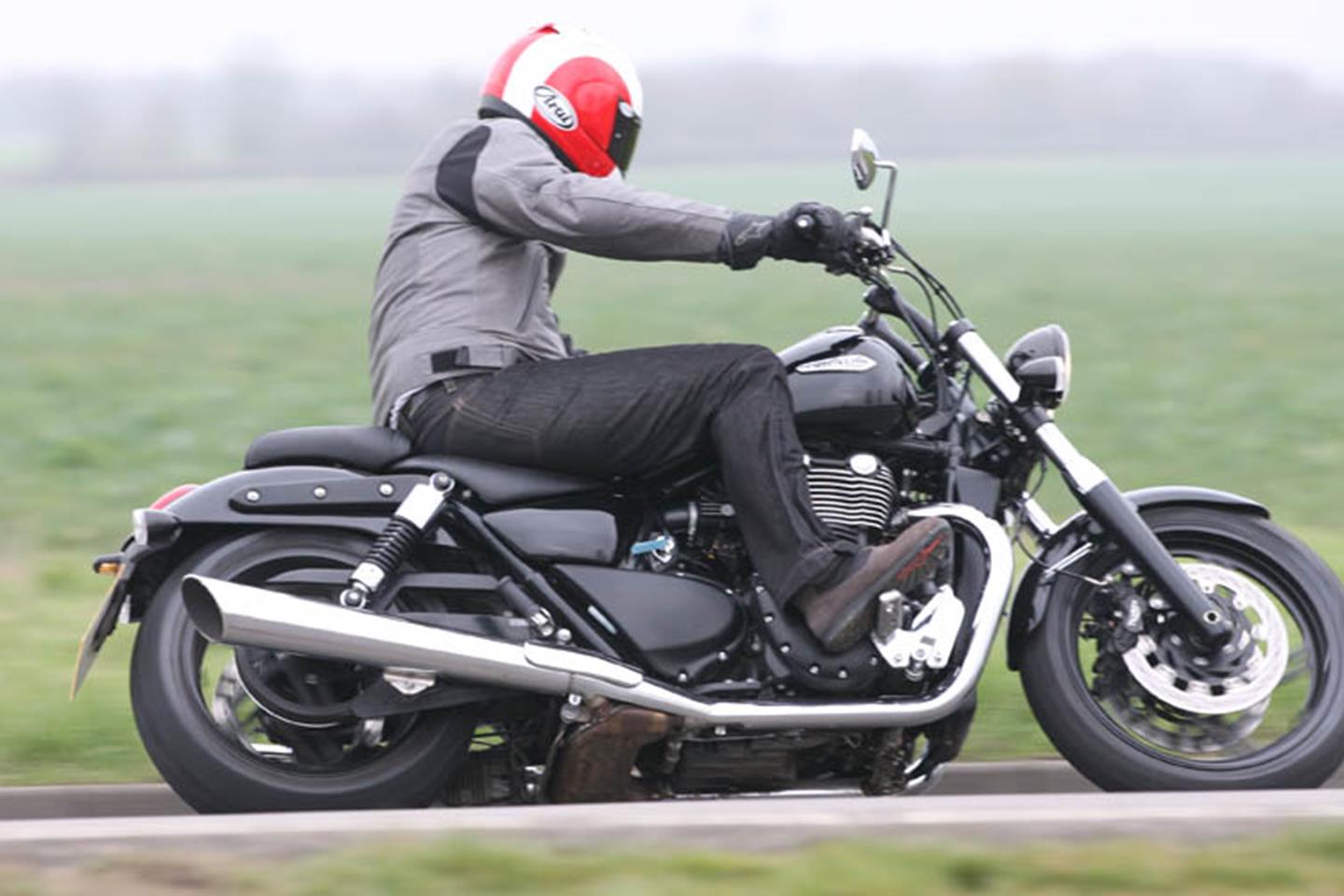 On the other hand, there’s no getting away from the fact that the Storm can’t quite match the competition for sheer punch. The Triumph unit’s virtue is in being a beautiful creation to use day-in, day-out.

There have been no reported reliability issues with the Triumph Thunderbird so it’s fairly safe to assume the same will be true of the Thunderbird Storm.

Our Triumph Thunderbird owners' reviews show one reader had six problems that were fixed under warranty, but he was pleased with how Triumph dealt with it. That appears to be an isolated issue at time of writing, though. 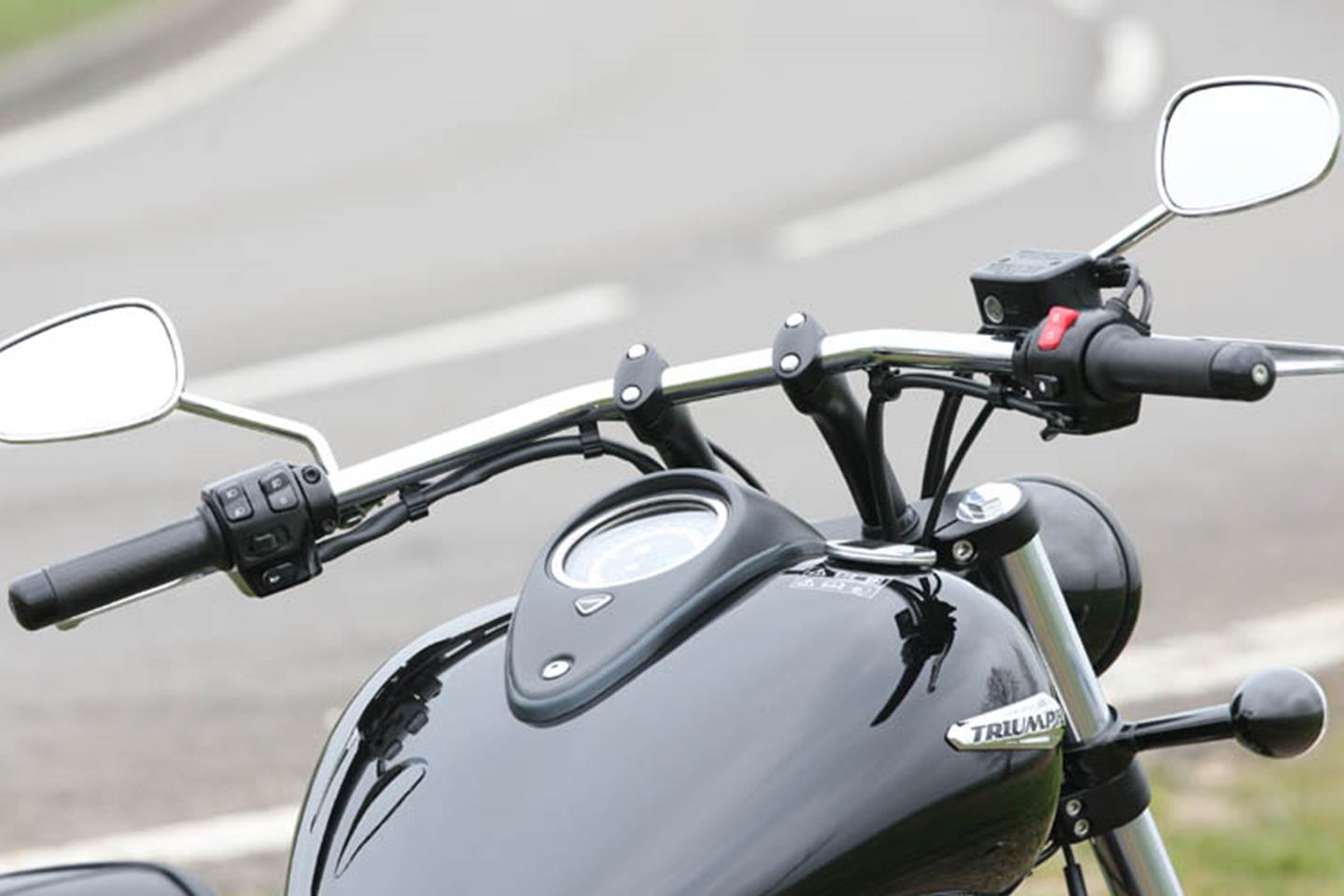 Priced between the standard Thunderbird and Rocket III Roadster of its day, the Storm represented fair, if not startling value.

Custom bikes enjoyed a boom in popularity in the ‘00s perhaps due to a generation of erstwhile sportsbike riders looking to ride in style (and more importantly comfort). These bikes exert an appeal on anyone who likes chromed parts, dark paint and has a desire to be different from the hordes of plastic rockets and desert rally look-a-likes.

Harley achieved great success with its Dark Custom range, particularly with the style-conscious and cash-strapped youth of America - something Triumph noticed, no doubt.

A contemporary rival of the Storm was Harley-Davidson’s Muscle; a seriously cool… erm, muscle bike. Especially in yellow. It excites in every quarter (looks, performance, pulling power and resale value). And it’s a Harley-Davidson which, in this category, matters. A lot.

So how do they compare? Well, if you’re looking for a genuine slice of hot rod heaven, the Triumph – good though it is – isn’t the one to go for. It’s far too diluted for that.

Instead, Harley-Davidson’s Muscle and the Victory Hammer S are the bikes to have – and not just because they actually look like hot rods, but because they perform like them, too.

If you want the mostest in a straight line, it’s the Muscle, but the Victory’s all-round aplomb elsewhere means it puts it at the top of this hot rod tree.

A modern equivalent would be the Triumph Bobber Black, Triumph Speedmaster or if you wanted something with a bit more poke and modern styling, the Ducati XDiavel.

Dressed in black paint – matt or gloss black, your choice – with a drizzle of chrome-plating, the Storm carries off the mean and moody stance with ease.

Flat bars and dual headlights add individual style and the capacity hike of 102cc, taking the Storm up to 1699cc from the standard Thunderbird’s 1597cc, confirms its hot rod status. 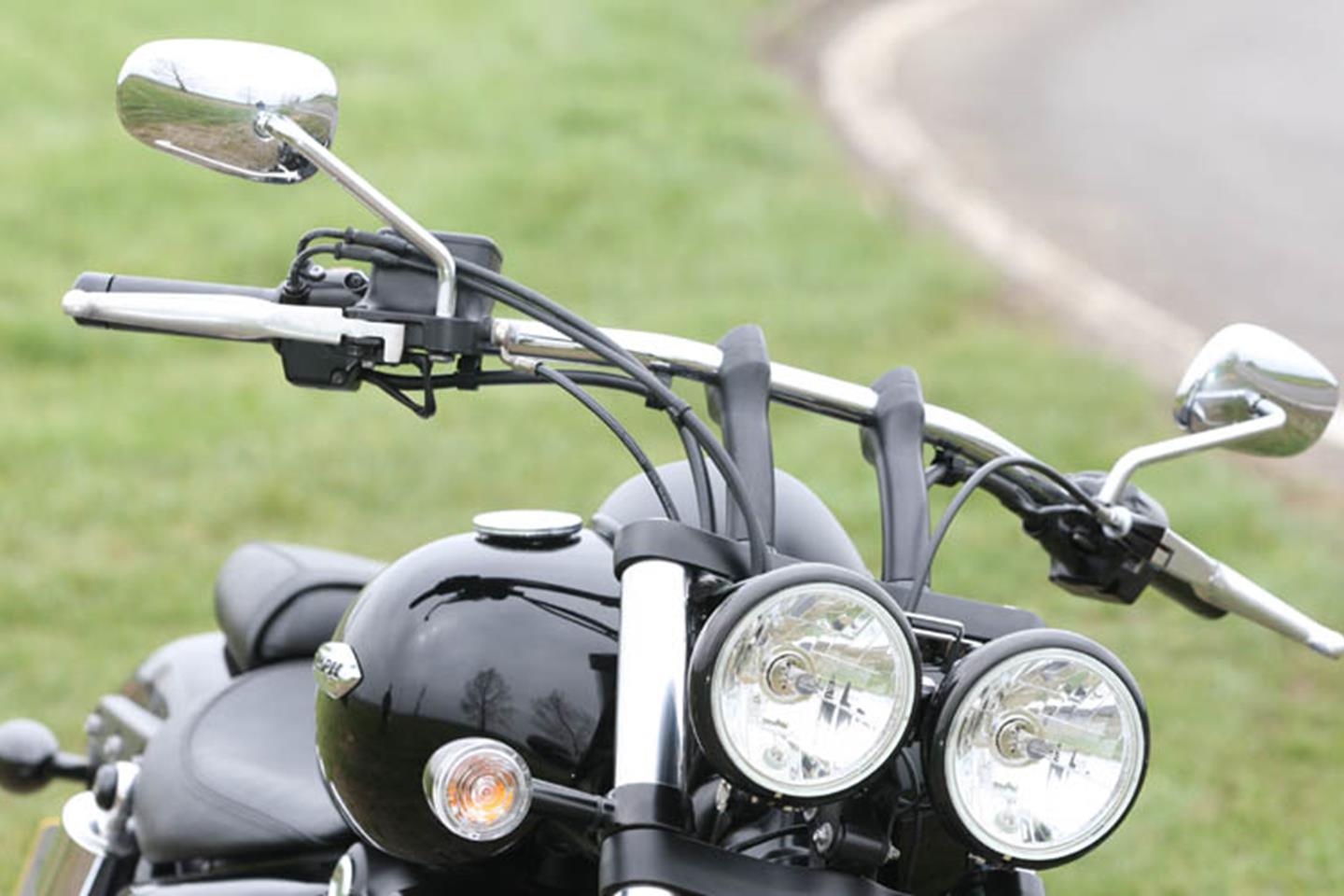 TRIUMPH THUNDERBIRD 1700 for sale with MCN

Other Triumph Thunderbird reviews on MCN

2 owners have reviewed their TRIUMPH THUNDERBIRD 1700 (2011 - 2013) and rated it in a number of areas. Read what they have to say and what they like and dislike about the bike below.

Great bike, I'd have another. Rides well for a cruise but has it limits that a cruiser always will Dealers very good, but terrible reliability.

Awesome brakes for a cruiser and adequate suspension. Its a cruiser so limited travel but comfortable enough to ride all day.

Brilliant engine , nice feel and character without lots of vibration.

Reliability & build quality 2 out of 5

Poor, 6 warranty jobs in 2years, but triumph and Webbs handled them brilliantly offering courtesy bikes and getting mine fixed qluickly

Abs and thats about it , but that's the point.

Buying experience: Webbs were perfect couldnt fault then at all.