The Yamaha R6 features a breath-taking chassis that outshines a rather breathless motor, but there are many positives. The updated looks are stunning while the front end and brakes help make this a truly brilliant-handling middleweight.

However, it’s an expensive 600, especially for one with reduced peak power due to Euro4 constraints. Despite this restrained nature, the R6 remained - after 20 years of production - in a class of one, being the only supersport updated for Euro4 regulations.

Although seemingly a stiff, track-focussed weapon, after a year of service at the hands of Senior Road Tester Adam Child as a long-term test bike, the R6 proved to be so much more. Covering around 15,000 miles in all weather conditions, it became a trackday-busting, B-road blasting all-rounder, capable of huge distances and surving the winter grit.

Unfortunately, the Yamaha R6 wouldn't be updated to meet Euro5 emmissions regulations and so became a track-only machine called the R6 Race from 2021.

The aluminium frame is lifted from the old bike – with the rake and trail remaining the same – but the fully adjustable forks have been stolen form the R1 and now have a 2mm wider 43mm diameter. The front wheel comes from the MT-10, which now accommodates a larger 320mm front disc (up from 310mm). The calipers and radial master cylinder are new, again borrowed from the R1, and ABS comes as standard.

The ABS brakes are a step forward over the old model’s, as is stability under hard stopping. The new forks deliver first class feel, and give you the confidence to brakes late and deep into corners. Once turned the R6 craves even more corner speed than before. Its agility and accuracy on track are stunning; it hits every apex with ease.

The R6 steers beautifully, it’s accurate and easy. I added a little more preload as the forks were bottoming out on the run into the Mountain, causing the R6 to understeer a little, but otherwise the front was perfect.

The rear was a little soft. I’d previously reduced the preload for the road, from 5mm to 13mm of unladen sag. We could have reduced the sag a little more to 10mm but I actually preferred the soft compliant feel of the rear end. I’m more accustomed to road bikes not race bikes with very little feel and prefer the softer set up and increased feedback.

The ABS brakes are a step forward over the old bike, with improved stability. The new 43mm forks offer excellent feel and give you the confidence to break late and deep into corners. It’s agility and accuracy on track is first class, it hits every apex with ease.

The ABS can’t be switched off though, however it doesn't feel like it's hindering a fast lap. The same can be said of the standard traction control. It still allowed small controllable wheelies over Cadwell’s famous Mountain and only kicked in when the rear tyre started to spin when the bike went light.

Again, if I was really trying for a fast race lap I’d want the traction control switching off, but like the ABS, for normal trackdays it’s perfect.

There’s crisp new fuelling but the engine remains virtually unchanged apart from the addition of a gear position sensor, which both informs the rider of the gear selected but also allows different maps for each gear.

The Euro4 engine feels strangled, it revs freely but couldn’t open its lungs to show what it could do – the famous R6 top-end rush is sadly lacking.

Modify to reach the full potential

To unleash the full potential, we would suggest adding a free breathing Akrapovic exhaust system - something we did to our 2017 long-term test bike. Previously kicking out 114bhp, the R6 is now capable of a healthy 121bhp, with more to come.

More importantly, midrange power is now increased too, however it is £323 for the titanium silencer and £685 for the stainless downpipes. The gain is impressive, but man maths would be the reason to justify the purchase.

A lap of Cadwell Park

It sounds brutal – most bikes redline at 10,000rpm or below, but the R6 really needs to be hammered for a fast lap, all the way to its 16,500rpm redline. It will drive from 7000rpm but below that it feels like you’re towing a caravan. Around the glorious Cadwell Park you need to stay in the sweet-spot, between 10,000rpm and 16,000rpm. The rev-happy Yam takes the punishment lap after lap.

At fast motorway speeds, 90mph-ish the analogue rev counter is hovering around 8500rpm, which sounds painful but isn’t – peak power isn’t until 14,500rpm and the redline is at 16,500rpm.

Even at this high rpm it’s averaging close to 50mpg and nearly 130miles before the fuel light flicks on. The standard screen is just about tall enough and the ergonomics are fine at motorway speeds.

Despite the high revving nature of the R6 we don’t envisage any problems with the latest version as it’s primarily based on the reliable previous model.

That said, owners have previously reported issues with the bike's EXUP servo due to lack of use on the last generation of Yamaha R6. What's more, there have also been recorded complaints of cold starting issues, with the bike struggling at low rpms shortly after the initial start-up. However, once up to temperature, it is fine.

At just under £11,000 at its launch, the Yamaha R6 was (and remains) an expensive supersport bike, but is the only Japanese 600 machine which is currently Euro4 compliant. it is also the only 600 to come with traction control and ABS as standard.

Flash forward to 2018 and this price had further increased to £11,499 - making it a similar price to top-spec litre bikes from only a handful of years ago. It went off sale in 2021.

Six-way traction control comes as standard, and works from wheel sensors instead of the more common internal measurement unit (IMU). The TC level can be changed on the move, but can only be deactivated at a standstill. There are three rider modes plus a conventional, upshift-only quickshifter. ABS now comes as standard and can’t be switched off.

New for 2020, the Yamaha R6 will be available in an M1-aping Icon Blue or stealthy Midnight Black.

YAMAHA R6 for sale with MCN

Since its introduction in 1998, the Yamaha R6 has defined the supersport class. Below are the six major updates for the Yamaha R6 throughout its 21 year lifespan. 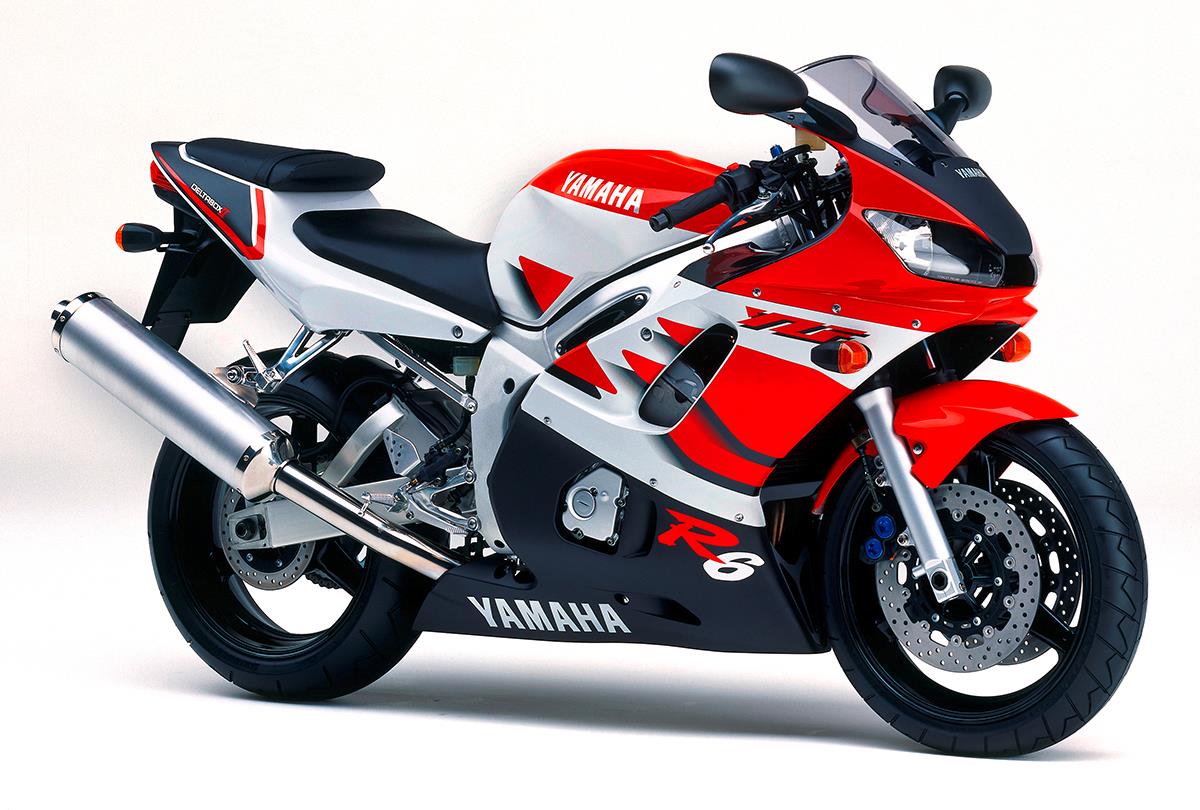 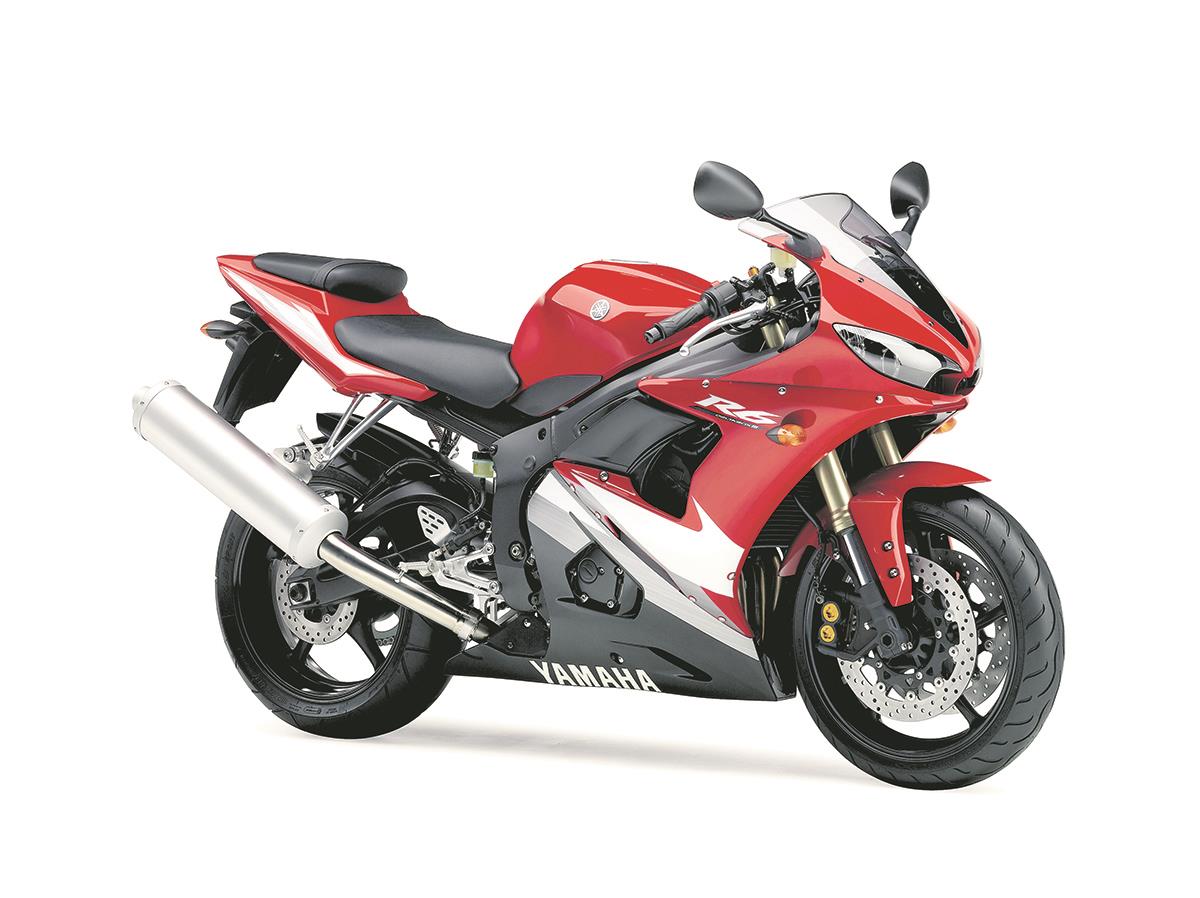 As a last hurrah for the model Yamaha throw on an inverted fork, radial calipers and give the engine another tickle. 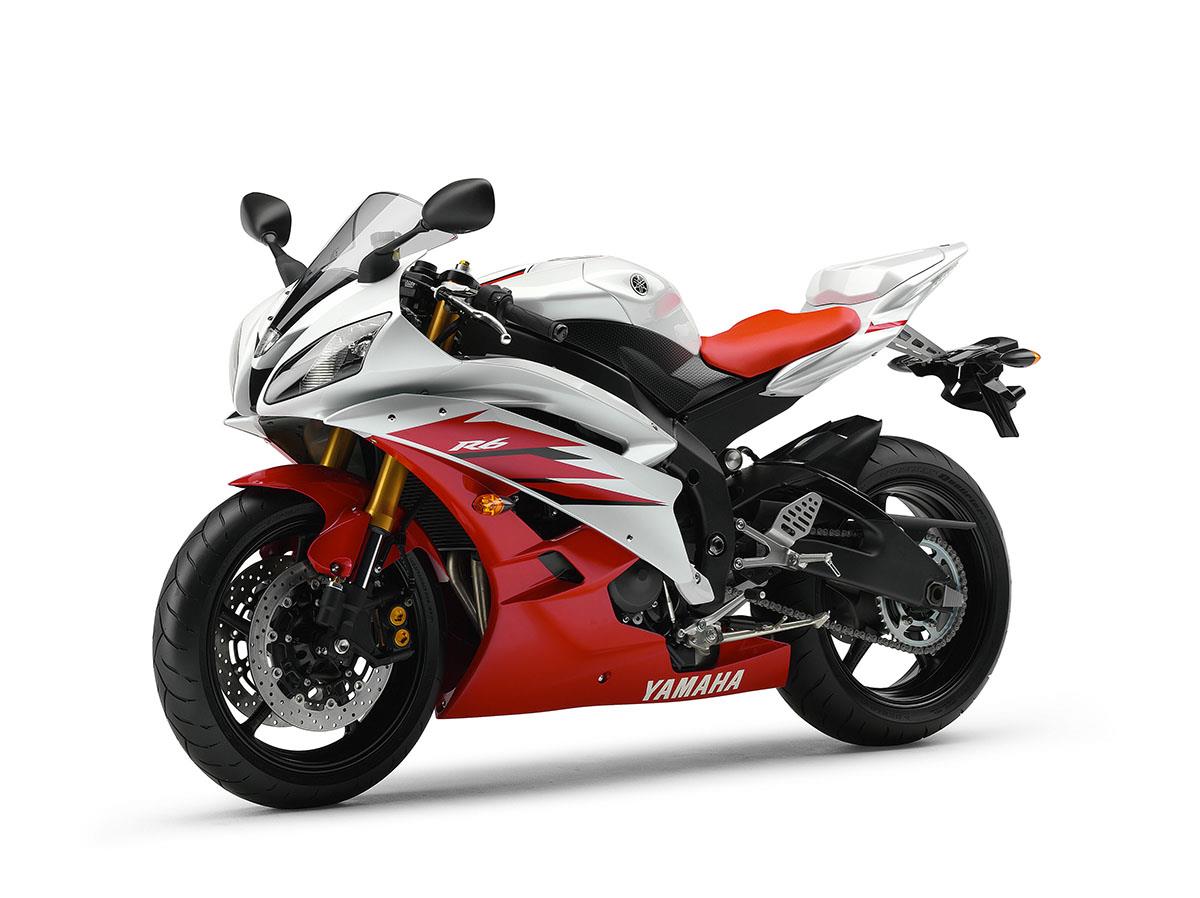 The R6’s most radical overhaul saw it get more track-focused. A completely new machine, it blazed a trail for new tech, too – with YCC-T (Yamaha Chip Controlled Throttle). The engine developed a claimed 127bhp, while Yamaha said it revved to 16,500rpm (which wasn’t quite delivered on the dyno) but it was still a screamer and, of course, sublime on track. 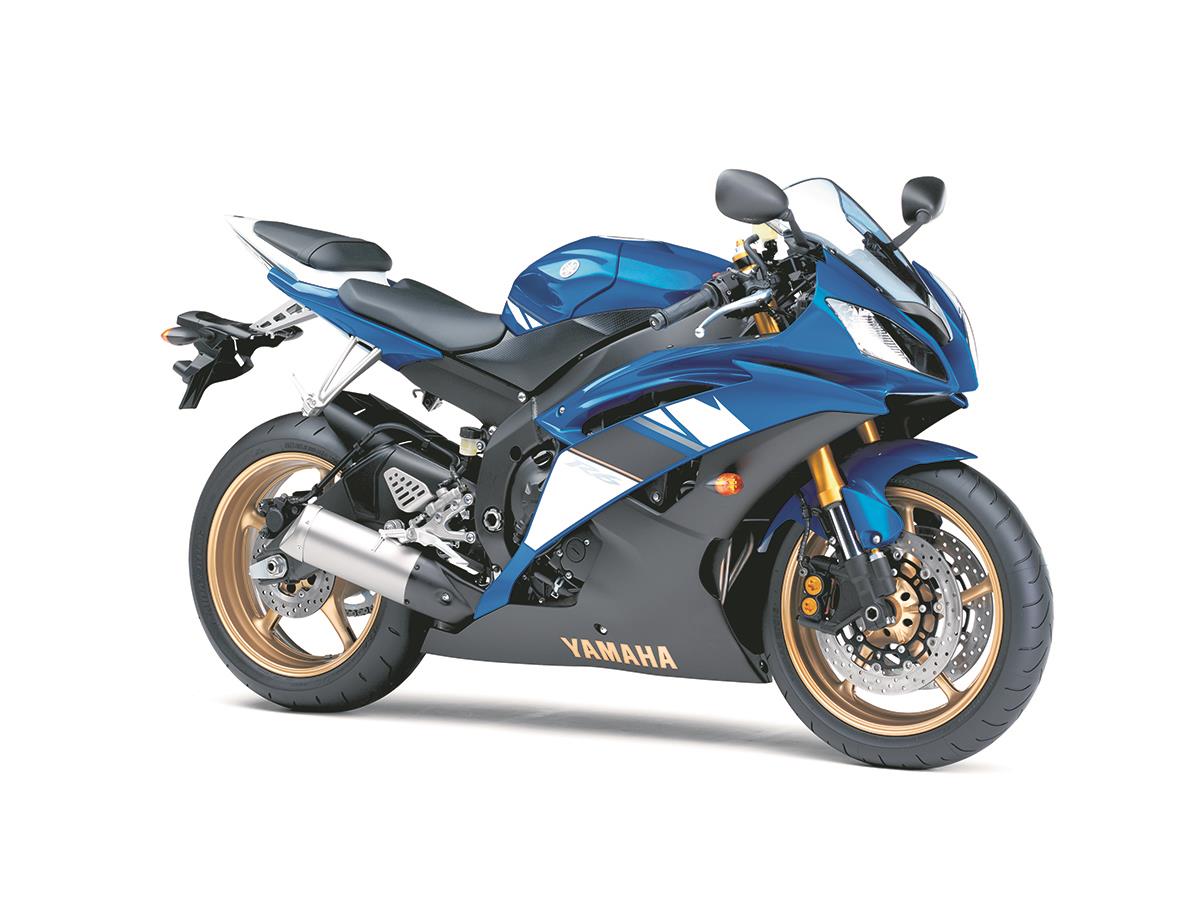 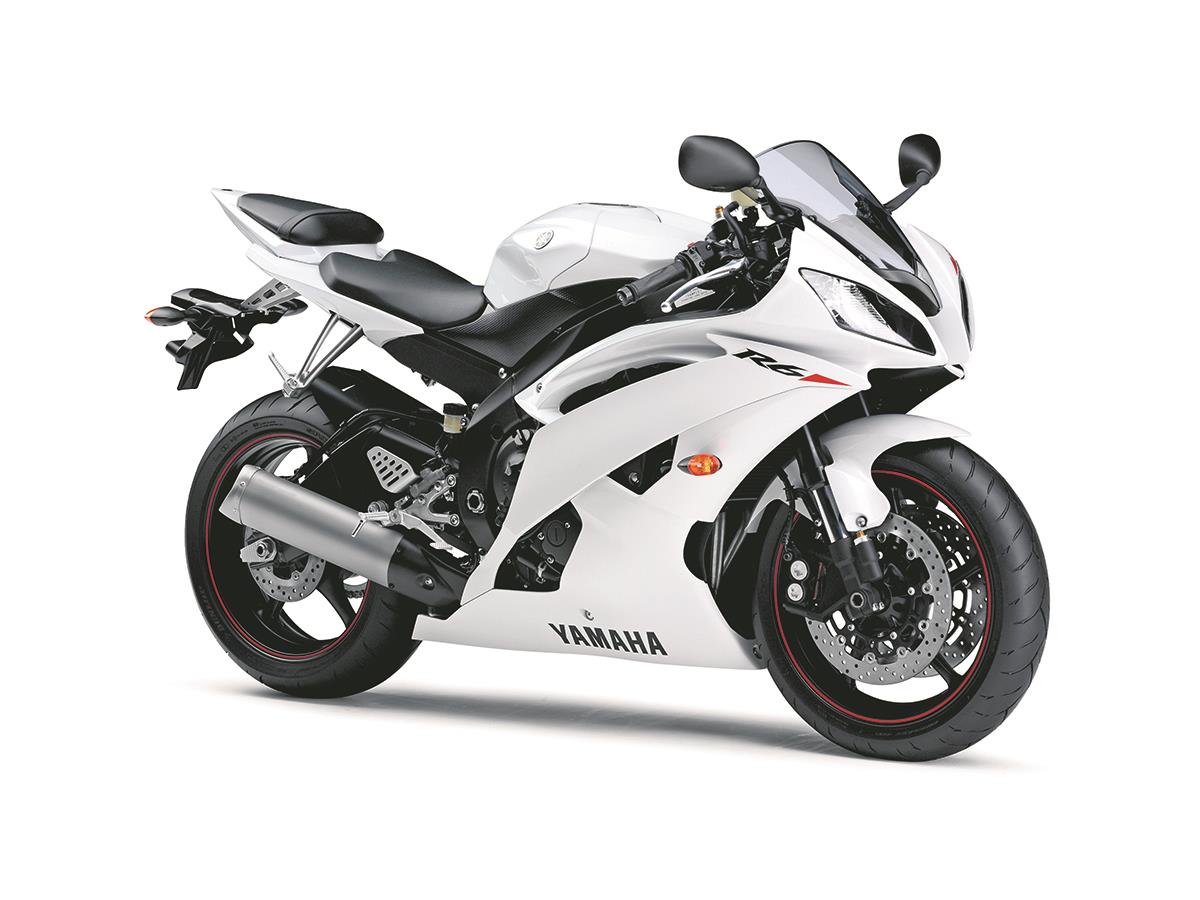 The last update for the model saw Yamaha shave a few bhp off the top end to give it back in the midrange. The end can, once a stubby little affair, gets a little longer and more ungainly. 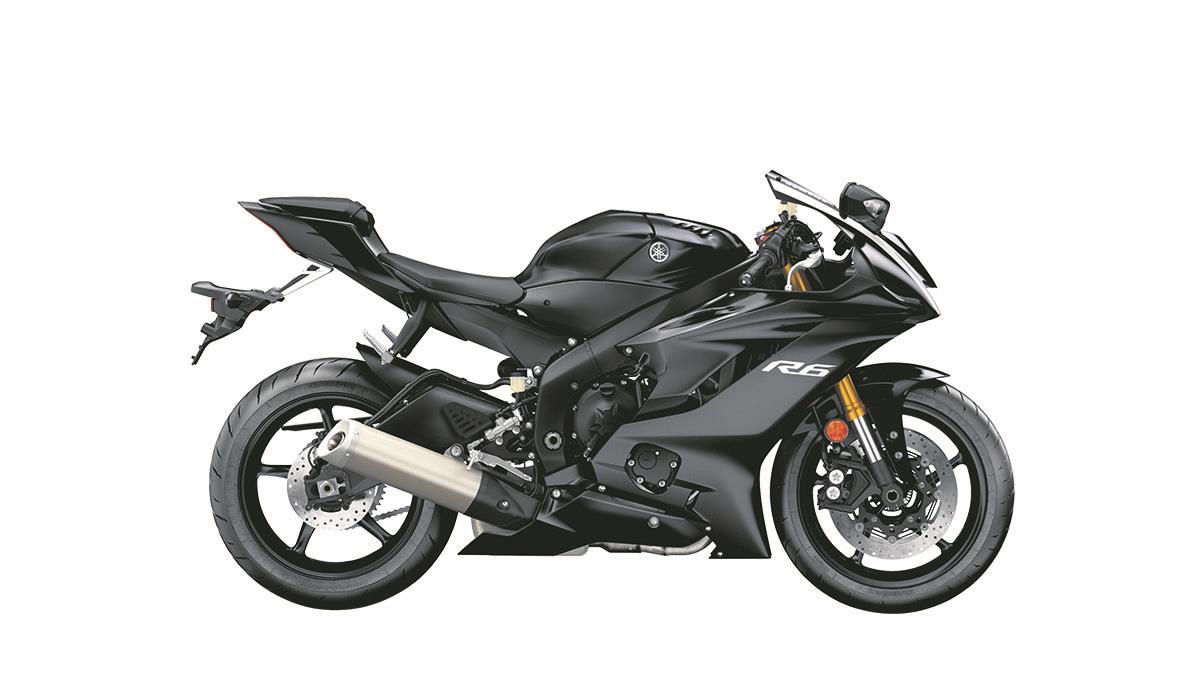 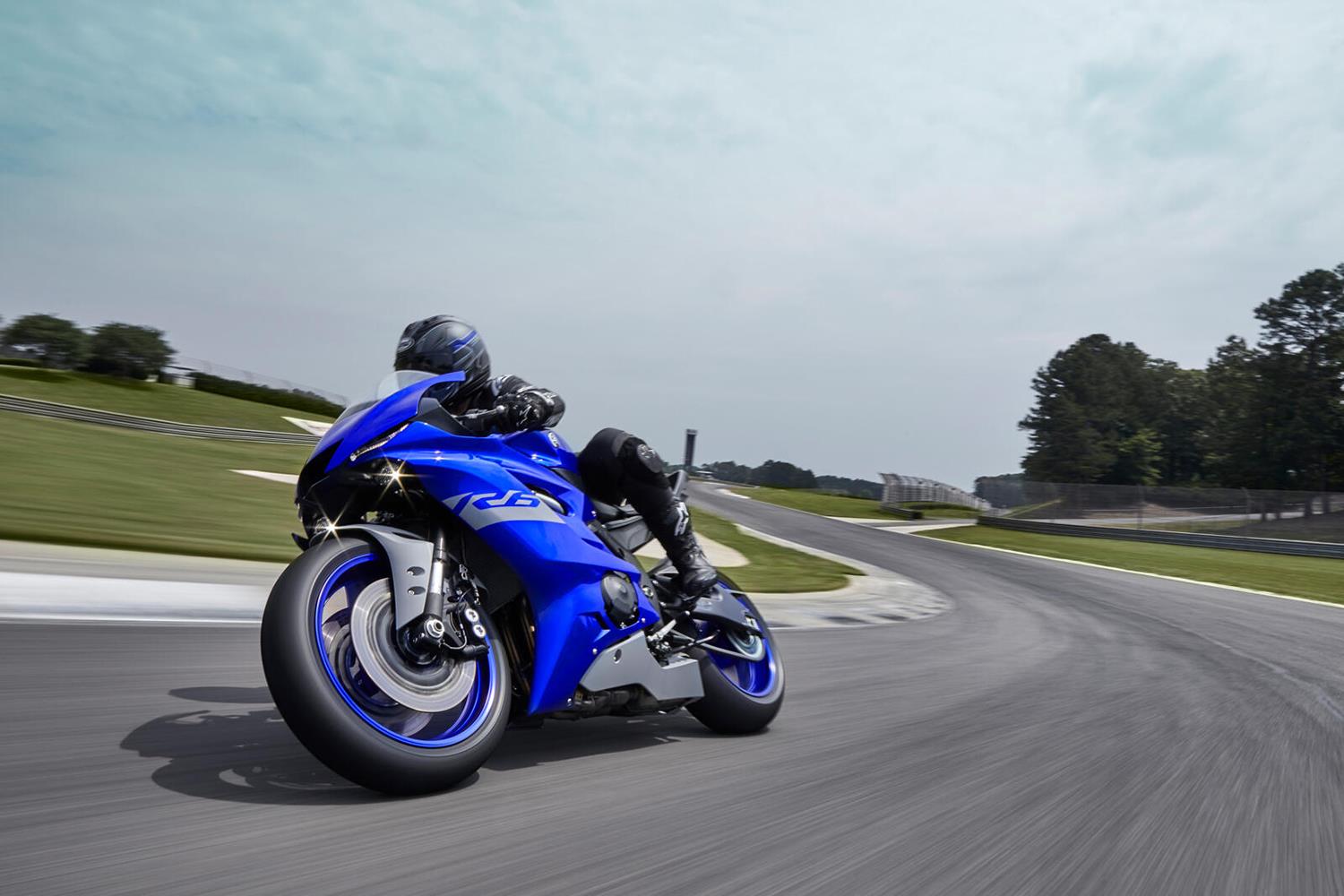 Yamaha R6 becomes R6 Race and is no longer available as a road going model in Europe.

The Yamaha R6 has been the basis for a number of other models in Yamaha's range, with de-tuned motors being used in upright machines like the XJ6. The 2004-2009 Yamaha FZ6 Fazer also uses a detuned R6 lump, as well as its brakes.

Whist in Almeria for the launch of this bike, we got the opportunity to ride the race-kitted R6, complete with an electronics kit borrowed from World Supersport, with up and down quick-shifter and a gorgeous sounding full titanium Akrapovic exhaust. Yamaha wanted to show us what could be achieved without Euro4 and the result is stunning, the best R6 to date.

I’m still one month away from R6 ownership as Yamaha’s all-new YZF-R6 was only launched to the world two weeks ago.However, I was lucky enough to spend a day testing the new R6 in Almeria, Spain so I’ve already got an idea of what to expect, at least on track anyway.  Related: Find Yamaha R6 bikes …

1 owner has reviewed their YAMAHA R6 (2017 - 2021) and rated it in a number of areas. Read what they have to say and what they like and dislike about the bike below.

When I get my 2020 R6 it will be ohlins kitted, brembo kitted, Acko kitted. All to match my 2013 R6 I kitted out the same. Awsome following Awsome. Had to sell GL13CVP to sureve 9 weeks before gettiong paid on a new job.

The Yamaha R6 is superb on track

The analogue rev counter is a nice touch

A neat tail is reminiscent of the Yamaha R1

Indicators are built into the wing mirrors

There is the option to instal a tail tidy

Adam Child tested the bike at the lauch

ABS cannot be switched off