KTM have upgraded their 1290 Super Adventure S making it smarter, easier to ride and cheaper to boot.

The biggest tech jump for KTM is the addition of cruise control radar – so far the only brand to include it as standard. The radar has five distance settings as well as an overtake assist function that gives you a quick speed boost for lane changing and passing.

The suspension has benefitted from a jump in tech smarts. The WP set-up has had an update to the electronic brain, which means it can respond much faster to changes in the road surface.

There are three suspension modes as standard (comfort, street and sport) plus two optional ones (off-road and auto – which is a fully automatic damping option). The rear shock now has automatic preload (with a manual override) that has doubled the adjustment of the previous unit.

There’s also been an update to the electronic safety aids thanks to the switch to a new six-axis IMU. The general gist of how it operates is the same but it’s all been refined to help 'enrich your connection'. The whole lot is operated by brand new switchgear that appears a considerable improvement on the old stuff and is controlled through a new 7in TFT dash.

Changes aren’t just electronic though, with plenty of physical redesigns taking place. For a start the tank has changed with KTM moving to the twin low slung tanks like on the 890 Adventure, themselves styled to look like their Dakar rally machines. The new bodywork should also help shield riders from the wind, while the screen can now be raised 55mm higher.

There have been changes to the frame too, including pulling the steering head 15mm further back while extending the subframe by 15mm. The change people will feel most will be an 11mm lower seat height, as the previous model’s tallness was off-putting for some riders. It’s now pretty much the same as a BMW R1250GS.

The engine has undergone some small updates to help it pass Euro5 regulations but overall output and delivery remain virtually unchanged. There are also more optional extras now (far too many to list here) but you can get the lot in the 'Tech Pack' if you desire the fully loaded approach.

These spy pictures are the best yet of KTM’s 2021 1290 Super Adventure S and R and reveal that the range-topping adventure bike will debut not only radar-guidance but also get a new look, updated chassis, revised V-twin powertrains and more.

The finished look of the test mules, along with the fact the outgoing Super Adventures debuted in 2017 and most KTMs are updated every three years, suggests the new bikes will be unveiled in November.

As before, there are two versions: the more road-orientated S, with 19/17in cast wheels, shorter-travel suspension, two-piece seat and taller screen; and the more off-road R, with 21/18in wire wheels, longer suspension, narrower one-piece seat.

The most radical addition is the new radar-guided, adaptive cruise control, as indicated by the housing for the radar sensor in the headlight, and which has been expected from KTM (as well as Ducati and Harley-Davidson) for some time.

The rest of the bodywork is all-new, too, and looks to be following the example of KTM’s 2019 790 Adventure by adopting a low-slung, rally-style, 'horseshoe' or saddle fuel tank to lower the centre of gravity and also improve rider mobility, particularly off-road. The bike also uses side-mounted radiators, rather than a large single radiator.

The rear subframe is new, being a cast alloy item (as recently seen on the 790 Duke and 890 Duke R and latest 1290 Super Duke) rather than tubular steel, presumably to add strength and lightness. The cast alloy swingarm is a new design, too.

The huge silencer is new as well and, if KTM follow previous practice, we expect the 1301cc V-twin to feature many of the revisions which debuted on this year’s 1290 Super Duke, resulting in a more refined, less aggressive power delivery. 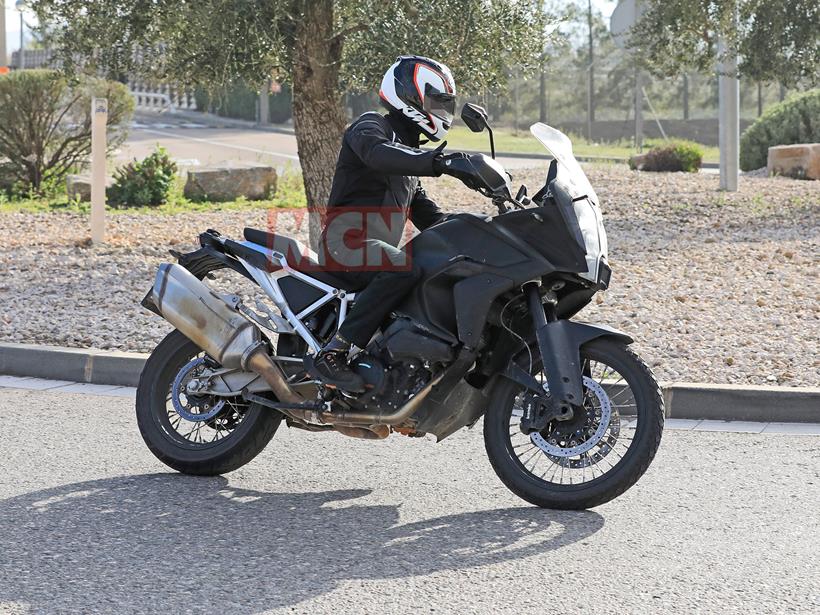 KTM are testing a new version of their 1290 Super Adventure models with all new styling and cutting-edge tech as these spyshots reveal. We had initially expected to see the new models last year, however given that KTM are still testing the bike now suggest they had some kinks to iron out.

The biggest change comes in the styling, which has been radically updated to be closer to the current 790 Adventure. The large conventional petrol tank has gone in favour of the split saddlebag style tanks on the 790, which are themselves styled after KTM’s Dakar winning rally bikes.

Doing this not only frees up space but also distributes the weight lower down the bike, making it easier to handle off-road. Paired with this is an all-new aluminium subframe, as well as a wider headlight mask, which houses the new electronics.

The biggest electronic update is clearly visible between the headlights – a radar unit for cruise control. Made by Bosch, the unit allows the bike to smoothly accelerate and decelerate with traffic while the cruise control is active.

Both Ducati and BMW have said they’re working on this technology and given that neither have presented a bike using it so far, suggests the rollout may have been delayed by Bosch. This new tech will all be controlled through the huge full colour TFT dash, which is likely shared with the one on the latest 1290 Super Duke R.

The Super Adventure also gets a new swingarm, which appears to be significantly larger than the old model to increase stiffness and an all new aluminium subframe will help offset the increased weight of the new electronics. This R model sports 21/18” wheels and conventional suspension but an S model with electronic suspension and 17/19” wheels was also spotted.

Also shared with the Super Duke R, is the 1301cc motor in the Super Adventure – although the engine in the Duke is tuned differently for more top end power. It’s likely that displacement will remain the same, however KTM will likely have done some work to offset the power loss expected from the humongous Euro5 friendly silencer. We’d expect it to stick around 160bhp – more than enough to make progress.

Given that Euro5 is in in place, KTM currently have until December this year to sell their non-compliant bikes, meaning we should see this new machine next spring. However if manufacturers get their way and extract a delay due to coronavirus, we might not see it in dealers until 2022. All this new tech comes at a cost – we’d expect the new R to cost £14,000 while the S will be nearer £16,000. 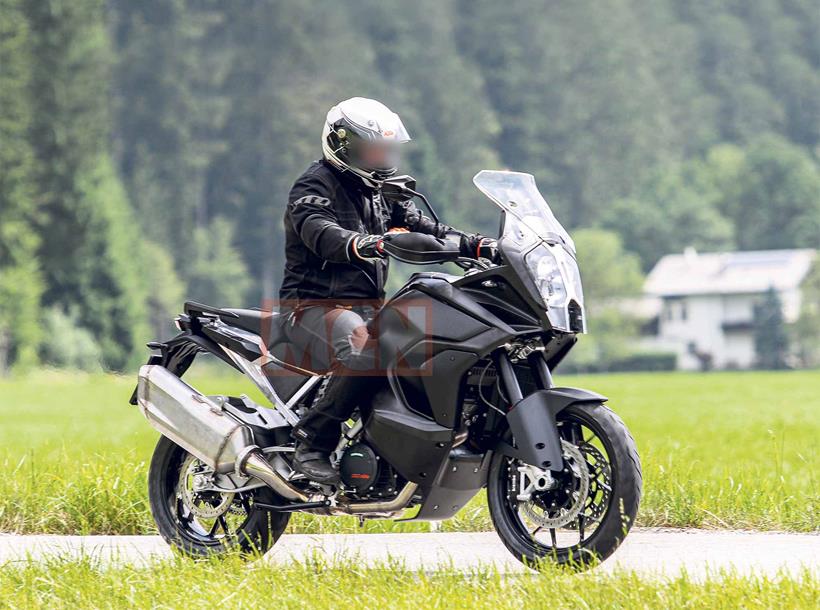 KTM's 1290 Super Adventure will be a tech marvel and it's on course to be the first bike in the world with radar-guided cruise control. Spyshots of the new range-topping machine have emerged, which suggest not only is it set to take the sporty adventure touring top spot but that it will likely do so imminently.

With Euro5 on the horizon, they will have had to retune it – hence the whopping exhaust as well as new split radiator system. We imagine KTM will want to keep their place in the horsepower race, so don't be surprised if it creeps up by the odd bhp.

Matched to this we expect the bike will come with the latest and greatest electronics, such as cornering ABS, lean-sensitive traction control and various modes. It’s not clear from these pictures but we imagine it will get the brand new full-colour TFT dash we’ve spied on the 1290 Super Duke GT.

Sticking all that torque and power into the old chassis hasn’t always given KTM the greatest results, so it appears they're tackling that issue with this new model. The main frame has changed slightly, while the subframe is now an aluminium trellis and there’s a gargantuan new swingarm.

The outcome of all these changes is likely an increase in stiffness to the whole platform, as well as a reduction in weight. The bodywork too has changed, with the fuel tank replaced by two low-slung fuel pods as on the 790 Adventure.

The real headline grabber is the big hole in the headlight that holds the radar for the cruise control. KTM have already admitted to working on the system, which slows the bike down to match traffic in front, although this is the first time we’ve seen it on a production machine.

Assuming Ducati don’t sneak something out, this will be a world first. We expect it to be unveiled at the Milan show in November.