The 2019 Scrambler Icon 800, like the previous version, is simple, easy-to-ride, but now softer, more comfortable, with improved looks and features like DRL, and cornering ABS.

Costing well over £8000, it’s stretching your wallet a little more, and it’s a shame the engine lacks character. Even if you don’t buy into the hipster image, marketing hype and lifestyle it’s still a brilliant all-round attractive road bike. But it’s only a small step of an improvement over the old model, not a giant leap. 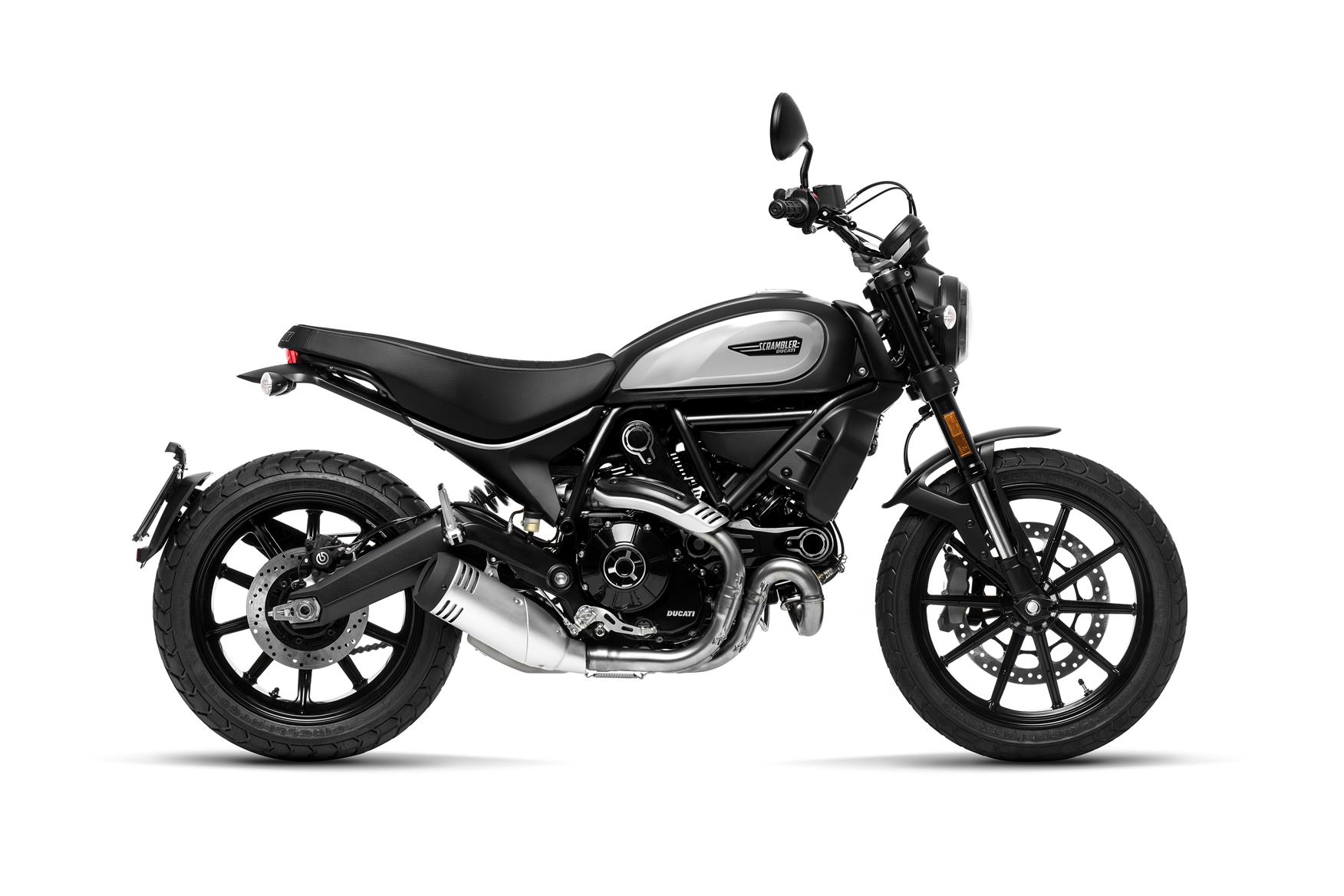 In 2020 the Ducati Scrambler Icon Dark was introduced to the line-up, and as the name suggests, it had a darker paintscheme.

Based on the existing £8295 803cc air-cooled Ducati Scrambler Icon, the new machine will arrive in dealers in November and will be priced at £7595, making it the cheapest mid-sized Ducati retro, yet still £496 more expensive than the likes of Yamaha’s XSR700.

However, unlike the MT-07-derived Yamaha, the Dark features dual-channel cornering ABS like the other 803cc Scramblers, alongside LCD instruments including a gear indicator and fuel level.

Finished in matt black, with a black twin-spar trellis frame and seat with a grey rim, the new machine also includes a steel teardrop fuel tank, complete with interchangeable aluminium side panelling.

Continuing the black theme is a die-cast aluminium swing arm, rounded mirrors and 10-spoke alloy wheels, which come as an 18in front and 17in rear and are shod with enduro-inspired Pirelli MT60 RS tyres, as found on the Icon.

Ideal for tackling the urban sprawl in style, the new bike comes with a manageable seat height of 798mm and weighs just 175kg dry. This is aided further by wide handlebars and a relaxed seating position, as well as a modest power output of 72.5bhp. A hydraulic clutch also features, alongside an adjustable lever.

Away from performance, the new bike is also fully compatible with the Ducati Multimedia System, allowing you to connect your smartphone directly to the machine, in order to listen to music, make calls and more. 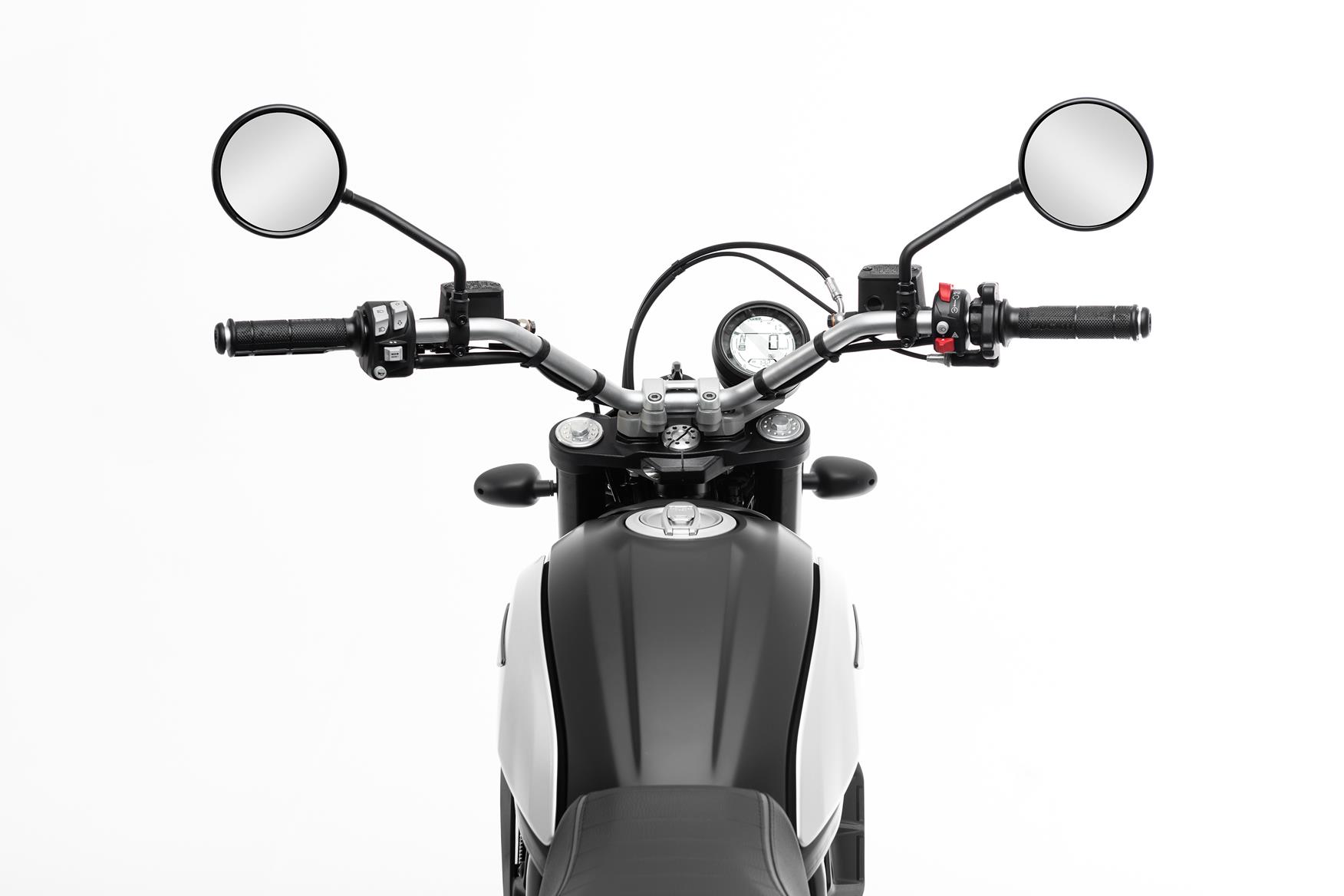 In this video Chad tests the Icon on its launch in Italy.

The Kayaba suspension is completely new front and back. From the outside they appear the same, but the front now has hydraulic bump stops not mechanical, and the rear spring is completely new. Static sag has increase, which means the bike sits more with the rider on-board.

This results in a softer ride, the bike doesn’t jolt over bumps and takes everything in its stride. The increased suspension travel hasn’t affected stability, but the bike has more tendency to sit on the rear spring when ridden aggressively.

In extreme situations over undulations ground clearance has been reduced, which is a result of the softer spring. Although the new Scrambler has gained a few KG it’s light, easy-to-ride and manageable. The off-road looking Pirelli rubber is also impressive – as on the old bike.

Ducati have played around with the fuelling and added a hydraulic clutch instead of a cable, otherwise it’s unchanged. On paper, power is 2.5bhp down, but this is more than likely due to the new agreed way of measuring power across the industry.

The 803cc air-cooled motor is based on the old Ducati 796 Monster engine. The bore and stroke has remained the same, but the valve overlap, injectors, air-box and exhaust are all-new compared to the Monster.

Power is linear, starts from low down and is more than enough power for an entry-level bike, however more experienced hands may want a little more top end urgency and it lacks character; a disappointed soundtrack from the tweaked exhaust.

Reliability shouldn’t be a problem as the motor is based on the proven Ducati 796 Monster – service intervals are long every 7,500. The level of finish is very high – there is some lovely attention to detail.

We don't have any owners' reviews of the Icon, but those from the 2015 model show the usual Ducati trait of high servicing costs, and a few reliability and build quality problems but nothing that sounds too serious or common.

Technical improvements and tweaks to the styling have meant an unfortunate price hike. The first Ducati Scrambler back in 2015 was affordable, costing less than £7000.

Its competition comes in the form of the Harley-Davidson Sportster 883, Triumph Street Scrambler, Yamaha XSR700 and Moto Guzzi V7 Stone.

But, despite adding an IMU, Ducati haven’t added any traction control. The revised Kayaba suspension only has pre-load adjustment, but DRL lights now come as standard, the clocks are more informative with a clear gear position indicator and fuel gauge, plus there’s new switchgear.

During the 2021 update the Icon got a new red paintjob to accompany the standard colours.

DUCATI SCRAMBLER 800 for sale with MCN

The Scrambler 800 was the orginal of the species and initially consisted of the Icon, Full Throttle, Classic and Urban Enduro, with the Flat Track Pro introduced slightly later on. Although all sharing the same basic makeup, each variant differred slightly and this can be seen below:

With other manufacturers investing more time and development in large capacity retro machines, such as the BMW R NineT range, Ducati introduced a larger 1100 Scrambler early in 2018.

Available in three variants; the standard 1100, the 1100 Special and the 1100 Sport. Much like the original 800s, the 1100 models all share the same base and 1079cc 4v V-twin engine and gain an extra disc at the front, for additional stopping power and a raft of electronic aids. The Special enjoys a host of neat aesthetic tweaks, such as spoked wheels and a chrome exhaust.

One of the cool things about niche bikes like the Ducati Scrambler Café Racer is that owners tend to be real enthusiasts and there are a couple of really active Facebook groups where the Scrambleristi show off mods, share tips and discuss plans. Membership is global, but now and then you come across…

The 2019 Ducati Scrambler 800 gets improved looks

The Ducati Scrambler is the perfect jacket and jeans machine

The 2019 Ducati Scrambler isn't afraid of getting a little dirty

2019 Ducati Scrambler has softer suspension with more travel than before