Triumph have gone back to the drawing board and produced the most powerful and fastest accelerating Speed Triple so far. Built to take on the latest crop of European super nakeds, the Speed Triple has been bored out and slimmed down in a bid for litre-plus glory.

Change is the story of the new Speed Triple but nowhere is that more pronounced than with the engine. Triumph have completely redesigned the motor so not one single part carries over from the previous generation.

The bore has been widened considerably (up to 90mm from 79mm) while the stroke has been shortened (60.8mm down from 71.4mm), which together with an overall loss in rotating mass and improvements in gas flow taken from their Moto2 project learnings, has enabled them to rev the engine higher than before.

Paired with this new motor is a brand new chassis, which Triumph say makes it the best handling Speed Triple so far – although they would, wouldn’t they? The headline figure is that the bike is 10kg lighter than the previous model, with the frame itself 17% lighter than the old one.

This, along with the boost in power, has contributed to a 26% increase in the power-to-weight ratio. The wheelbase remains the same, although with the new stacked gearbox, Triumph have elongated the swingarm, which helps improve the handling.

There have also been changes in the ergonomics – the handlebars are 13mm wider, to improve control at the front end, while the footrests have been moved inwards to improve ground clearance.

As you might expect from a top of the range super naked, the 1200 RS comes with flashy Öhlins suspension, top notch Brembo brakes, sticky Metzeler tyres and a host of electronics aids.

There are also helpful creature comforts such as backlight switches, cruise control and phone connectivity as standard. It’s also the first Triumph that’s completely keyless, so no need for a key to turn on the ignition, open the fuel cap or set the steering lock.

The Speed Triple 1200 RS will arrive in dealers in March, priced at £15,100, which is a big step up from the old model but on the money compared to the competition.

The two bikes were photographed at Brampton Hut services, near Huntingdon, on the afternoon of Thursday, January 21 ahead of its full reveal on Tuesday, January 26.

We first saw spy shots of a new Speed Triple in testing back in late 2020 and although details remain scarce, these don’t look all that different - retaining the same angry twin headlights, blacked-out frame, single-sided swing-arm, manually adjustable forks and Brembo radial calipers. 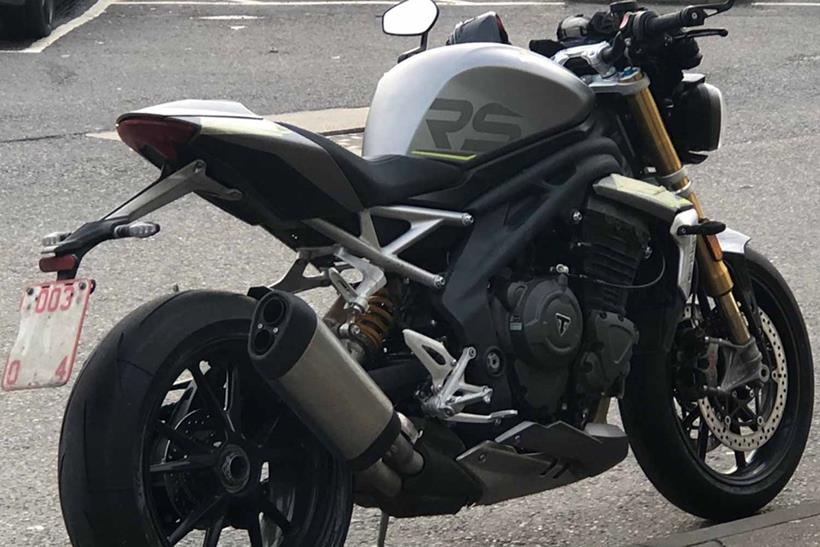 With a fully adjustable manual Öhlins shock and Metzeler Racetec tyres replacing the current RS model’s Pirelli Supercorsas, the new model also gets a fresh set of rims, with the current five spoke set-up swapped out in favour of a new V-shaped design.

Also new is the exhaust, which goes from twin under seat pipes to a single, low slung can, protruding out to the right below a new cast aluminium subframe.

This new pipe is presumably to help the bike meet Euro5 emissions regulations, and judging by the state of the headers, this clearly wasn’t their first outing on English soil.

On top of being slightly greener, the three-cylinder lump is also likely to receive a boost in capacity - as indicated by its new name and fresh engine cases, which suggest an entirely new motor. Alongside this, we would expect the Speed to get a boost in performance to around 175bhp – allowing it to compete with the likes of the KTM 1290 Super Duke R and Aprilia Tuono V4.

Other Triumph niceties include a TFT dash, which will presumably be used to help control a more advanced electronics package, as well as RS decals on the tank, optional rear seat cowling and Triumph logos within the engine cases.

Check back on Tuesday, January 26 for more on the bike and keep an eye out for the full Triumph Speed Triple review coming soon... 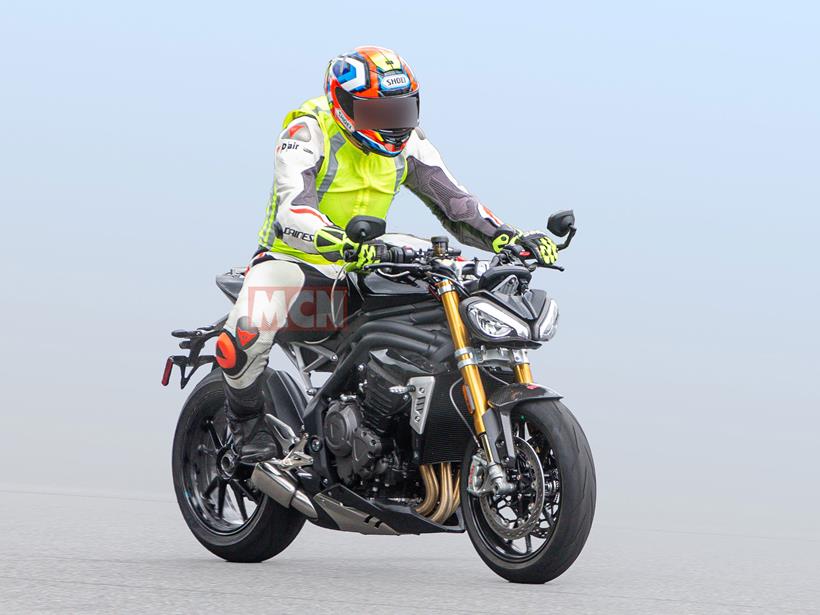 A new Triumph Triumph Speed Triple 1200 RS will be unveiled on Tuesday, January 26. We have already seen what looked like a new version of the brand's flagship supernaked in spyshots, but now a tweet has confirmed that the new model is on the way.

The fact that the bike is called the Speed Triple 1200 RS also confirms that the engine will be bigger than the old 1050, as we suspected.

Although a popular machine, Triumph have lost ground in the naked bike market against stripped back superbikes like Ducati’s V4 Streetfighter and horsepower monsters like KTM’s Super Duke R. Triumph will be hoping all these changes help to re-establish their iconic machine.

At the heart of the bike is a new motor, which judging by the cases appears to be a complete redesign rather than a tickle of the existing engine. To compete with the best, Triumph will have boosted capacity, likely to around 1200cc as well as copied the new Street Triple internals to shed some weight.

Given the competition, we imagine Triumph will be aiming for around 175bhp, as well as good torque from the new triple. As this bike has to be ready for Euro5 when it’s released, Triumph have fitted it with a brand new, low slung exhaust.

Paired with the new motor is an all new suspension set up. This particular model has Öhlins, suggesting we’re seeing the RS being tested. Most interesting is the rear suspension set up, with the shock now directly mounted to the swingarm, presumably so they could ditch the linkage giving more space for the massive catalytic converter. As with most fast bikes now, braking is courtesy of Brembo – Stylemas in this case. 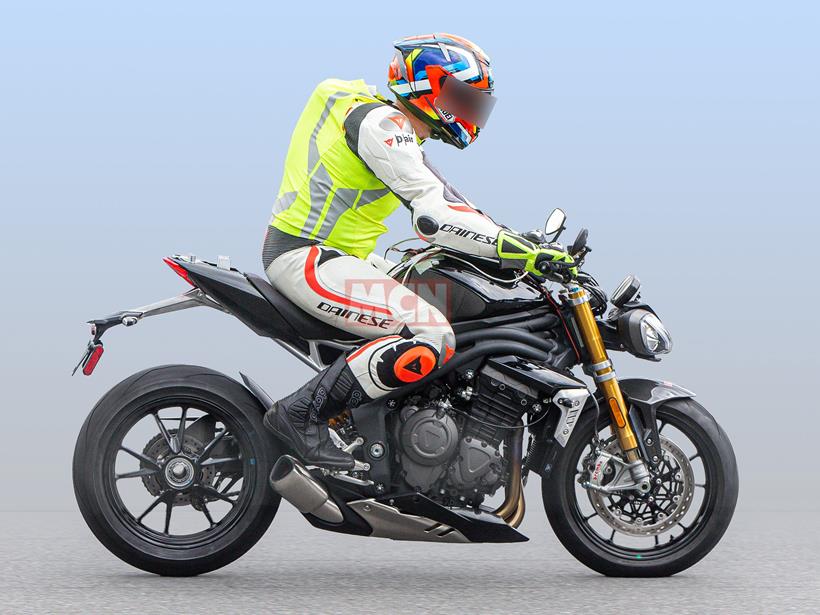 Of course super nakeds also mean super tech – we can see a quickshifter as well as a brand new dash behind the restyled lights. Expect all the usual anti-wheelie this and slide control that, plus some home comforts like Google Maps integration. A higher clutch suggests a vertical stacked gearbox, too, allowing for better packaging and a longer swingarm.

The style of the subframe is similar to the old bike but without an exhaust to hold up, the steel trellis has been swapped for cast aluminium. The new wheels not only add an extra touch of style, they’re no doubt lighter too to help offset Euro5 weight gains.

There’s no comment from Triumph, however given the Euro5 deadline we don’t expect to see this bike until spring 2021 at the earliest.

History of the Triumph Speed Triple 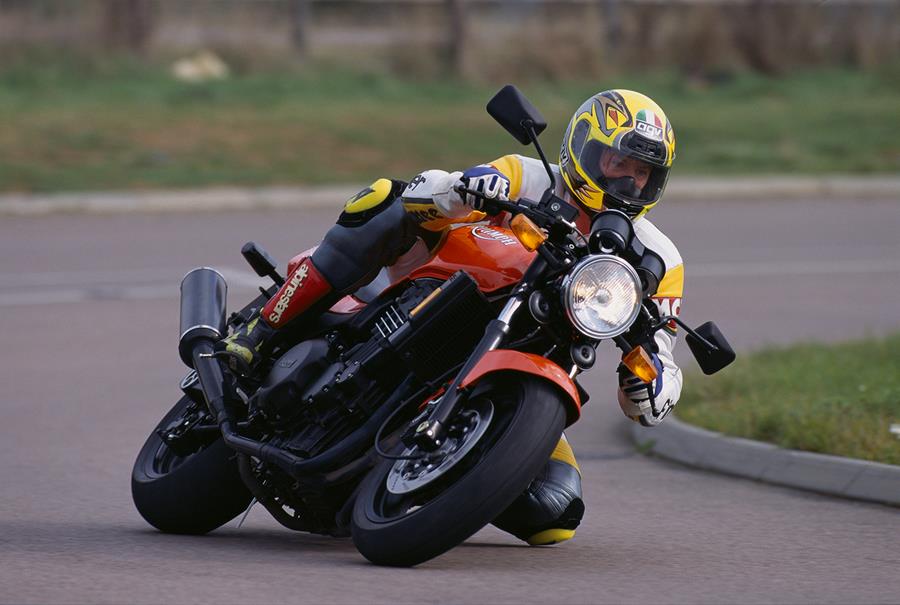 The Triumph Speed Triple is the British brand's all-conquering, large capacity naked sportsbike. Big brother to the incredibly popular Triumph Street Triple, the Speed Triple has been around since 1994 and has been a real success story for Triumph.

It started out life as a mean looking streetfighter version of a Triumph Daytona 900 with a single, round headlight and flat bars. Naked bikes consistently outsell other categories these days, but the idea was still quite new back in the mid-nineties.

The naked bike phenomenon became popular after cash-strapped riders who had crashed their sportsbikes started removing damaged plastics and fitting flat bars as a cheap way to keep their bikes on the road.

These early streetfighters, as they were called, turned out to be incredibly good fun to ride and manufacturers started to cash in on the trend. The Triumph Daytona 900’s versatile triple was the ideal lump to power a naked bike, with low down grunt on tap but more top end than a twin (the Yamaha MT-09 uses the same idea).

The latest Triumph Speed Triple uses a 1050cc three-cylinder engine and is truly deserving of the super naked mantle.

The Speed Triple has been around in one form or another since 1998 and there have been plenty of other super naked bikes in the years since. The Ducati Monster 1200, Honda CB1000R, Aprilia Tuono, KTM Superduke, Yamaha MT-10, Kawasaki Z1000, BMW S1000R and Suzuki GSX-S1000 are all capable machines, but the Speed Triple is arguably still top of the pile.

The original Speed Triple is a great bike if you lust after an old-school bruiser. Basically a naked Daytona 900, prices for this original generation are on the up, so you had better move fast! There was even a 750 version, but that’s best ignored…

Short-lived but a really great machine (and one that starred in the Mission Impossible film) the T509 brought with it the iconic ‘bug eye’ headlights, flat bars and a single sided swingarm. Surprisingly rare, they are brimming with a raw spirit.

Armed with a new 955cc engine, this generation looks identical to the T509 but makes more grunt. It is a common version in the used market with prices starting at £2500, however the best model is the post-2002 updated generation, which has a little more power and refinement. 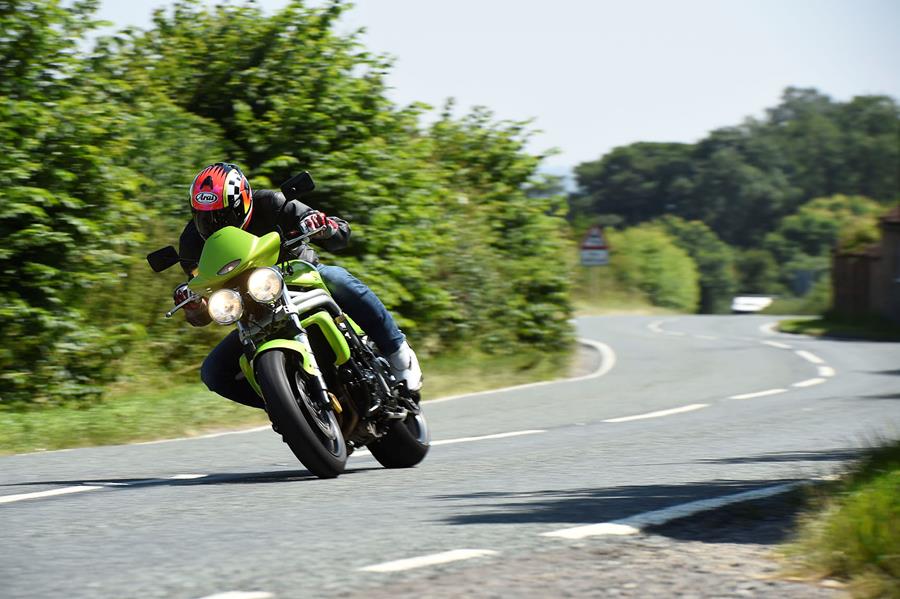 A truly great generation of Speed Triple, the 1050 was an all-new machine with a bigger capacity triple, underseat pipes and serious agility. Gone is the 955-generation’s fat feeling, replaced by a stonking chassis, stylish look and bags of grunt. The updated 2008-onwards generation is the pick with improved brakes, cool wheels and better pillion facilities.

The 2011 update marked a massive change for the Speed Triple as the ‘bug eye’ headlights were binned, replaced by a sharper ‘foxeye’ style of lens. The bike’s chassis was also given an injection of pace through revised weight distribution and ABS was an optional extra.

Suspension, motor, chassis, it was all upgraded and refined and in 2016 ride-by-wire was also introduced alongside a Euro4-spec motor and other chassis, engine and electrical upgrades.

The R models have run alongside the stock Speed Triples since 2012 and mirror the standard bike’s upgrades and model changes. In general, the R gets Öhlins suspension, uprated Brembo brakes and a flash of carbon here and there as well as some red paint on its subframe.

If you want the pick, search out an original 2012 Speed Triple R as that also gets PVM lightweight wheels, something that Triumph quietly junked the year after… 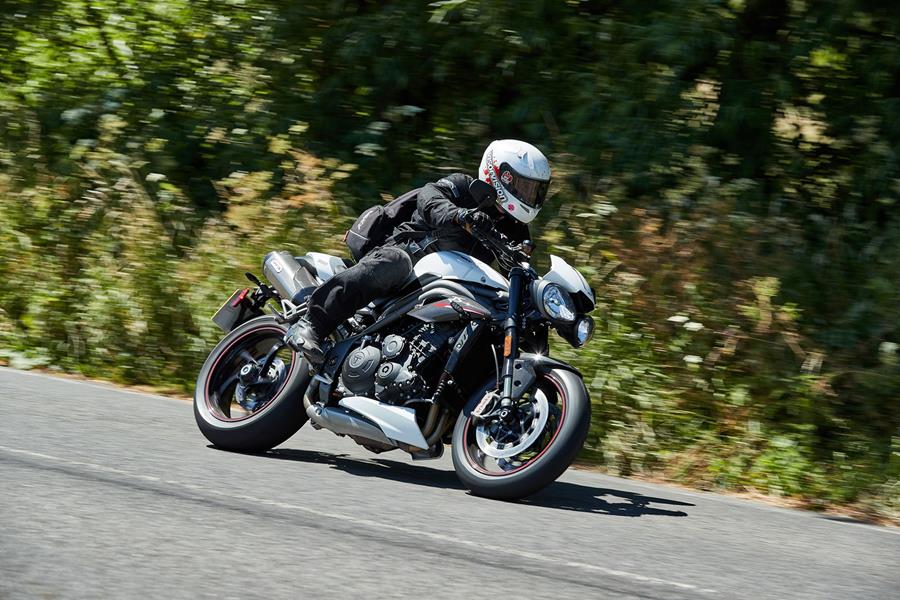 The 2018 Triumph Speed Triple RS won best super naked of the year in the MCN Bike of the Year Awards. MCN were impressed how the Speed Triple manges to be have the small, tight, refined feel of the latest 765 Street Triple with more grunt, reassuring big-bike-stability and attitude.