We're riding the significantly updated Honda Forza 300 (otherwise known as the NSS300 Forza) and can’t stop smiling. With the electric screen on its lowest setting, the refreshing cool breeze can be felt. Its sportier, lighter chassis is making easy work of the congestion and the premium scooter is eye-catching in the reflections of the exclusive shop windows. Move over supercar, coming through.

Honda have significantly improved the Forza, it’s a premium, good-looking, functional scooter, which should sell by the bucket load and continue the 2013 Forza 300's success.

The original Honda Forza 300 was low and laid back, more like a Honda DN01. This is a completely new look, with a ‘mass forward’ design. Honda wanted to give the Forza a quality feeling and appearance, which has worked.

There's a thriving online community for the Forza, along with PCX and SH125i scoots, at the Honda PCX/Forza/SH Forums.

In 2021 this bike went off sale, replaced by the larger-engined Honda Forza 350.

The 2018 model is shorter, 26mm, lighter 12kg, and the wheelbase has been reduced by 35mm. The steering head is steeper and the seat height is now 64mm higher (780mm), putting the rider more in control.

The new model is far more agile than the 2013 version, which actually seemed quite nimble at the time. The differences are more obvious at low speed.

The new Forza shares its engine with their cheaper Honda SH300i, which means a single-cylinder four-stroke, fuel injected, four-valve motor. Honda are claiming 24.8bhp @ 7000 rpm and 20fltb of torque @5750rpm.

Honda are claiming a Forza 300 top speed of 80mph, however on the launch in southern France we managed to edge out a few more mph. More importantly than top speed Honda are also claiming increased fuel economy, with a tank range of over 200 miles from the 11.5l fuel tank.

There is no reason to question the quality of Honda’s premium Forza, the single-cylinder four-stroke engine is unstressed and should run forever.

Our Honda Forza 300 owners' reviews show overwhelmingly positive scores for reliability, which won't surprise anyone who's heard of the company's famed build quality. However, there are a few notes saying that you need to keep the battery topped up in order to start the bike first time every time.

Used values typically range between £3-4500, and this bike would make a great secondhand buy thanks to Honda's aforementioned exceptional build quality.

The screen is now electronically adjustable, and one of the fastest we’ve ever experienced, almost like a Guillotine in reverse. It’s a simple, nice and smooth action, and can be set at any level, very much like the premium Honda Gold Wing.

Honda have re-positioned the battery and radiator to give even more under-seat lockable storage. With 53.5l of space, up from 48l there is enough room for two full-face helmets, with room to spare. There’s also a small storage compartment upfront, with a mobile phone holder, next door to a 12v socket.

For the first time Honda have chosen to fit HSTC (Honda Selectable Torque Control) to their premium scooter, traction control for those who don't speak Honda. The system uses the ABS wheel speed sensors to monitor wheel speed and intervenes when it notices a significant difference between the front and rear wheel speed.

When the system intervenes, there’s a flashing T indicator on the dash. Traction control may appear over-the-top for a scooter, especially when riding in the summer. But, fast forward six months, the middle of winter, wet cold diesel-ridden city streets of London, we’ll be thankful for some help.

The original Honda NSS300 Forza was made between 2013-2018, and updated for 2019. A limited edition version was announced in 2020, retaining the same engine, geometry and styling package revealed in 2018 and pairing them with new colours, stitching, top box and more.

First revealed in 2000, Honda’s mid-capacity maxi scooter has received a number of updates throughout its life and 2020 is no exception; retaining four colour schemes for the standard bike and a new Limited Edition model featuring a grey and gloss black livery, red-stitched leather seat, rim tape, colour-matched 45-litre top box and altered Forza 300 logo. Around 100 of these machines will be allocated to the UK market.

Underneath the changed exterior, the Forza remains the same as it has done since 2018 – featuring the familiar SOHC four-valve 279cc engine producing around 25bhp at 7000rpm, steel underbone frame, sleek bodywork and electronic gizmos.

This includes switchable Honda Selectable Torque Control (or traction control to you and me) which monitors the front and rear wheel speed in order to calculate any unwanted rear wheel slip. Once detected, the system limits engine torque via the fuel injection to get the bike back under control. 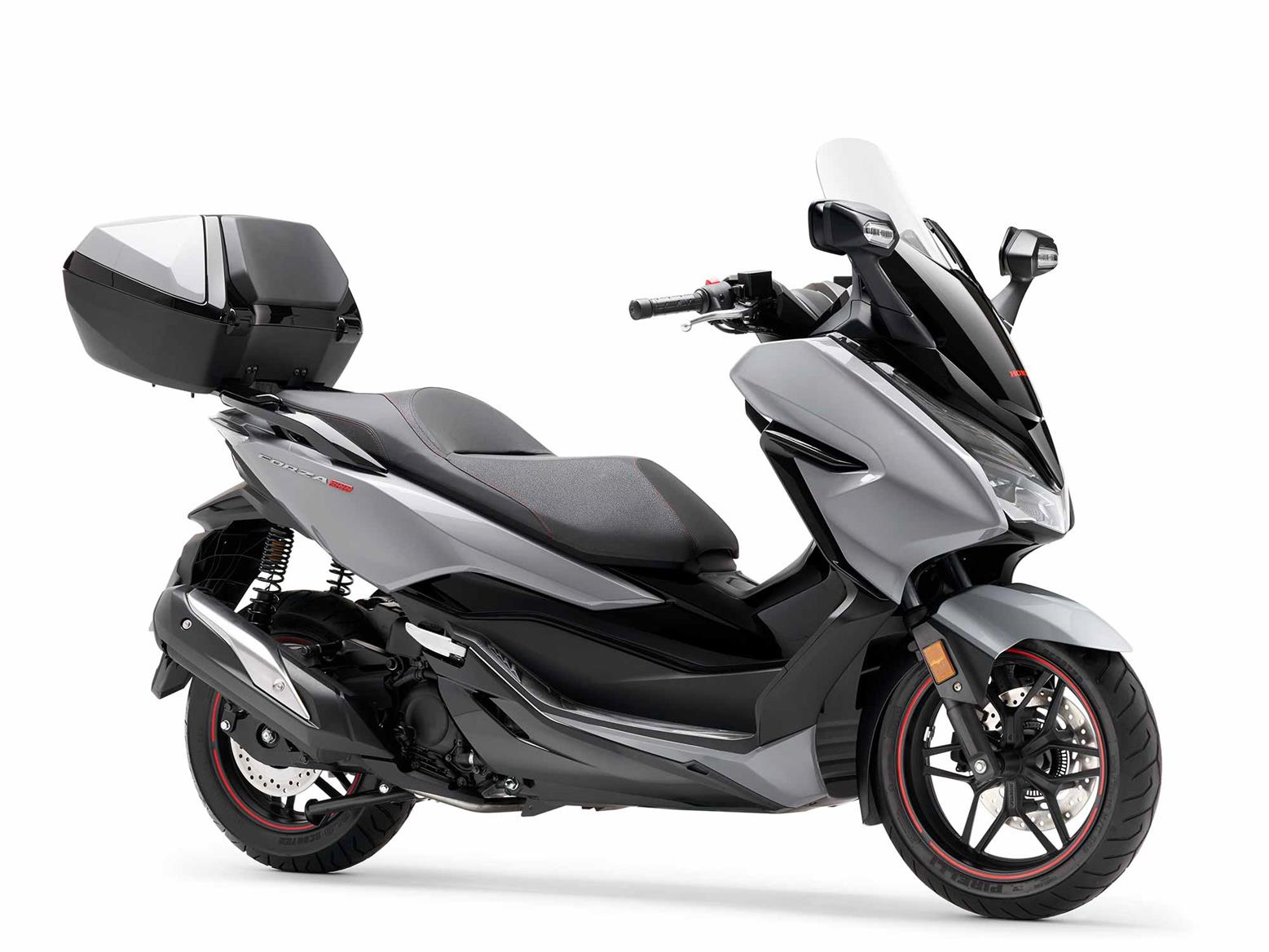 On top of this, there are also more practical measures, too, including space for two full-face helmets under the seat, which can be partitioned to store items separately, an electronically operated screen, and a lockable front left inner fairing pocket - housing a 12V charging socket.

This is secured via the bike’s Smart Key, which also controls the main ignition switch and optional 45-litre removable top box. Much like many modern cars, the box will lock automatically as you walk away, or at the touch of a button if you want some extra assurance.

In 2018, Honda also slightly updated the 125 version of their Forza scooter. The Italian built Honda has been specifically produced for the European market and like the 300 is designed to be a luxurious scooter, to give the most a 125 scooter can offer.

Honda have tweaked the styling, new clocks and LED lights, but more importantly added an electronic adjustable screen. As like the 300 underseat storage has also increased, and now comfortably accommodate two full-face helmets.

The clocks are now neater; the overall design has a classy look to it. The electronic screen, as like the 300 isn’t fixed and can be electronically set at any position. Under the seat space has increased by 2l, and up front there’s additional storage with a separate iPhone holder and 12v socket. All the design touches give the 125 a quality feel.

The idling stop technology works effortless, like a modern car disabling the engine once you’re stood still. When you want to move away you simply twist the throttle and the engine turn backs on automatically. It’s designed to save fuel in town, Honda quote a 310mile tank range from the 11.5l fuel tank.

The 4v engine 125 four-stroke has some kick to it, off the mark it’s more than quick enough to keep with fast traffic. Even on fast roads it’s happy to cruise at 60mph and a little more. You can almost question why would you want the Forza 300 But at £4689 it’s only  £410 cheaper than the 300 and on PCP it’s actually £10 a month more. So, the question really should be why buy the 125?

9 owners have reviewed their HONDA NSS300 FORZA (2018 - 2021) and rated it in a number of areas. Read what they have to say and what they like and dislike about the bike below.

BEST OVERALL 2 WEELLER I EVER OWNED. ASIA FEELING Like to give it a 4,5. For this trafic its the sweetspot can do perfeclty on all strust 130 km on hiway and perfectly 5 km in city. A ton off space to put your things in. Good weather protecting. Fuel can be better in my opinion i do normal drive 3.1L/100KM. I also changed the suspension with yess chocks verry good.. Handeling is light and smooth. Miss heated seats,croucecontrol,and hillassist. Overall super top scooter

Upgradede the suspension with yess. Best inprovment you can do. No more hard bumps.

Miss heated seat cruice control and hillasist. Oh and a upgrade in the dachscreen would be nice to.

Buying experience: 2 hand from dealer. It is ok

Typically honda build quality powerful as much as a scooter can burn up the tarmac nice touch with the electric screen ,instruments,overall a good solid scooter from Mr Honda except the suspension the only fly in the so great ointment the rear travel on the shocks are set high over stiff too low bottoms out in the middle as good as it gets for a scooter it is what it is

Buying experience: Local Honda dealer in Bristol purchased secondhand like new with the factory fitted heated grips presented like a brand new bike no demo test ride which seems the norm now I wonder if I had rode the scooter for two hours would I have handed it back or rode some others and purchased another scooter or bike

Great bike to get around on. Use it for commuting and two up trips to the coast,also good for short sprints along the motorway comfortable and economical on fuel plenty of space under the seat

Could do with a few more accessories

Love the Scoot in general not keen on the keyless ingnition

Quality is generally good but a few of the bolt holes are slightly cross threaded noticed this when fitting rear rack. Also battery needs to be fully charged for starting !

Self serviced running costs I've had at least 2 poor dealership services. One where they'd not even checked the coolant level which was very low and caused overheating

Great Storage enough for your sofa and one chair lol

Buying experience: Bought from Dobles motorcycles purchased without seeing was not disappointed the only thing is they haven't serviced the bike which they should have done

Great scooter really smooth and very comfortable..the only niggle I have is to keep topping up the battery needs to be full strength to start

i remove pads and clean each 6 mths.ride all day

very smooth, better than downtown 300i and burgman 400 also owned in past.i go with a motorcycle club and its taken some member back at its performance on motorwaysalso

6 stars it should be

A brilliant alternative to a second car, stylish, economical, reliable - what's not to like?

Loads of torque, great pickup between 40-60mph - sits at 70 all day on all inclines, also useful engine braking above 15 mph - feels unburstable. The unit has been fitted to the SH 300 and has been remarkably trouble free.

No problems at all - the usual Honda reliability

The standard screen is too low for those with long backs - Puig make a great replacement in smoked and clear variants. I have fitted a Givi rack and hand deflectors to keep the wind blast off the hands, also a hugger which keeps a lot of muck off the air box and cooling pipes exiting from the engine. Standard grip heaters work fine with deflectors, but a bit weak without assistance. Standard tyres are great and the charging port is really useful when the phone is using Google Maps, which can drain your phone battery quite badly; it should be a USB port, but the converter only costs £2 from a petrol station.

Sportier handling than my previous BMW GT650 but like most scooters, jumps a bit on rougher roads and bumps.

Engine smooth, economical (90mpg) and feels unburstable. I have used mine for touring with much bigger bikes in France and will run at legal motorway speeds unstressed albeit not much in reserve at 80mph!

Better quality manufacture than my previous BMW scooter and half the price. I would rate build so far as excellent at this price point.

Too new to comment but with enclosed drive, 90 mpg and 8000 mile service intervals it doesn’t appear expensive

Honda NSS300 Forza scooter side on