With its new short-stroke engine, ride-by-wire throttle, frame and a host of clever electronic upgrades, the 2013 update was the MV Agusta F4 1000’s biggest overhaul since it changed back to a litre-bike from 1078cc in 2010.

The F4 1000 carves through corners with the minimal effort of a well set-up race bike and has been a fixture on race circuits since it was introduced, both as a trackday weapon and in many race series.

But while it handles superbly and dishes up searing acceleration and mind-jangling top speed, the power delivery has too many flat spots and the throttle connection isn’t as predictable as its rivals.

As with many MV models, there are also a number of limited and special editions of the F4 and you can find reviews for some of them here…

MCN have been told by Sardarov that we shouldn't expect a new F4 1000 model from MV for "at least another five years". He said that in this interview in June 2020.

The F4 steers and grips like a racer - it’s a piece of cake to place wherever you want on a track, regardless of your speed. Ride quality is superb (and even plusher on the Ohlins-suspended RR version), Brembos powerful and full of feel and the bars are nicely spaced out (but too narrow on the RR).

But the riding position is very cramped and you can really feel the MV’s slightly porky 191kg dry weight when you’re braking for tight corners from high speed. If the power delivery was as good as the handling, the F4 would be a class-leader.

With its bigger ride-by-wire throttle bodies, the steel trellis frame had to be made wider and the new cast aluminium wheels (forged ali on the F4R and F4RR) are shod with Pirelli’s latest 200-section Diablo Super Corsa SP.

The base-model F4 now has the short-stroke motor from the old F4R and F4RR and produces 195bhp at 13,600rpm. It now has a lighter crankshaft, forged titanium conrods, revised cylinder head porting and the valves use a single spring instead of two.

All this ensures that the MV is seriously rapid, but it’s hard to meter out precise amounts of throttle when you’re riding fast. Weak power at the bottom end is followed by a muscular midrange, then a flat spot around 10,000rpm where the inlet trumpets lift clear of the throttle bodies.

After that it’s a turbocharged surge to the redline. On the road, at lower revs, this slightly unpredictable power delivery shouldn’t be as much of a problem, plus the fantastic engine note always makes up for any of the F4’s quirks. New electronics include a ride-by-wire system and new 50mm Mikuni throttle bodies, anti-wheelie, eight-stage traction control, four riding modes, electronic engine braking control, a quickshifter and auto-blipper.

Build quality and attention to detail is second to none. New underseat tailpipes are now sculpted to form a beautiful undertray section, there are little aerofoils underneath the belly pan for high speed stability and new LED running lights are fitted front and rear. Styling is to die for and the paint finish deep and luscious. MVs have had some reliability issues in the past and spares have been hard to get hold of, but these problems are becoming less and less of an issue nowadays.

Our MV Agusta F4 1000 owners' reviews show very positive comments. There aren't any specific problems reported other than a delay in obtaining parts.

MV Agustas used to be at the top end of the price scale, but that’s no longer the case. It’s not what you’d call cheap and it’s more expensive than its Japanese superbike rivals, but the F4 costs less than the BMW S1000RR Sport, Aprilia RSV4R and Ducati Panigale. The top spec RR is cheaper than the Ducati Panigale S and BMW HP4 Carbon.

As with any bike of this sort of performance, insurance won't be the cheapest, and parts and servicing can be a little fruity too.

As you’d expect, you get lots of toys for your money. They include a full electronic rider aid package, as well as fully-adjustable Marzocchi and Sachs suspension, Brembo monobloc brakes, a multi-function dash and steering damper. The F4 R has even more goodies fitted as standard. 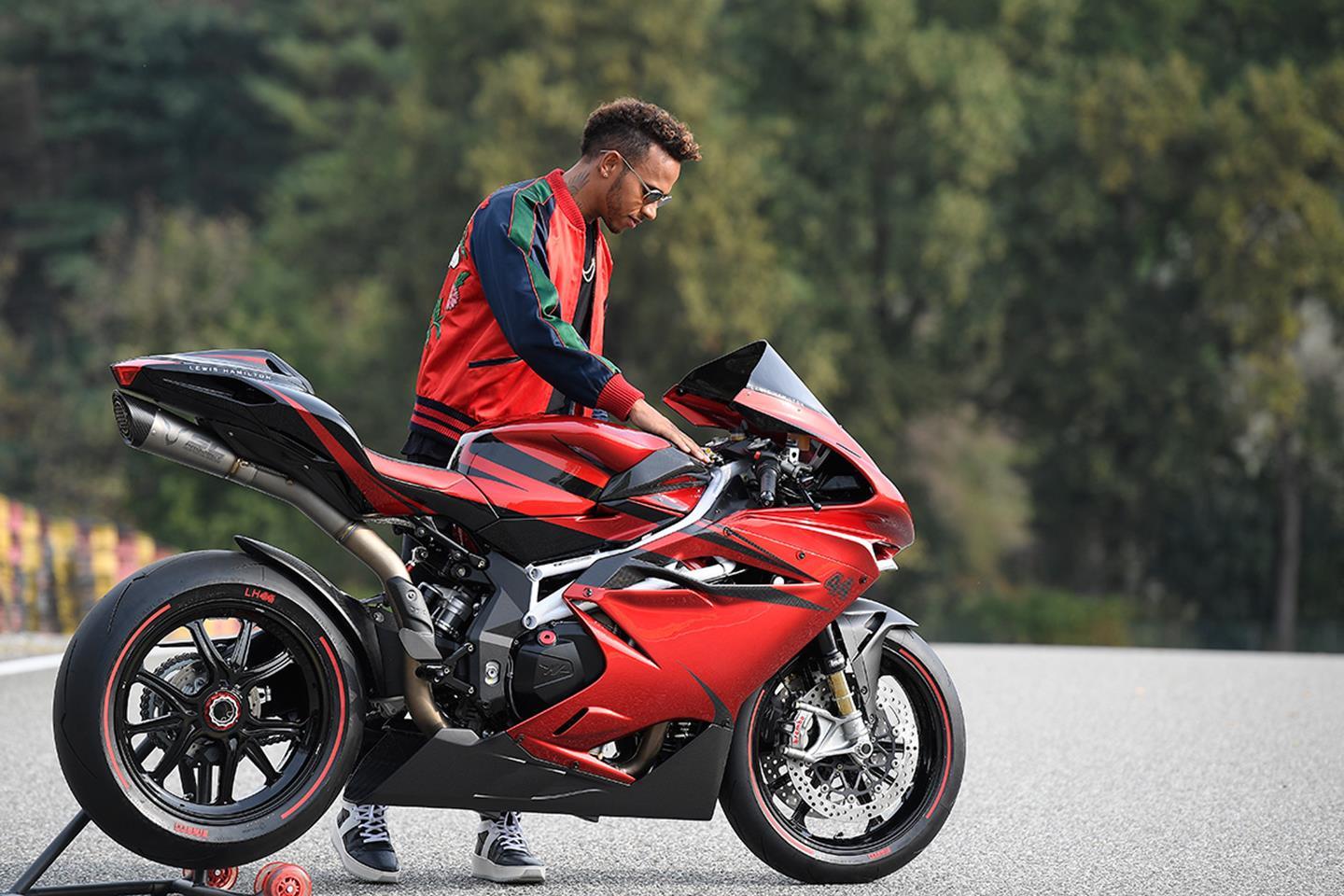 In September 2017 a special edition version of the F4 was launched to celebrate the F1 world champion Lewis Hamilton's relationship with MV Agusta.

There were just 44 units available finished in the same Candy Apple Red colour as the previous Dragster RR LH44. Öhlins also agreed to create black suspension components instead of the usual gold.

The fairings were made from carbon fibre and there was also a racing-style fuel cap, forged wheels and a CNC-machine rear wheel nut. Even the tyres on the bike were exclusively designed Pirelli Supercorsa SPs with red sidewalls and the LH44 logo.

Then, in October 2018, MV Agusta revealed the last ever F4 bike - the special edition Claudio (seen below), in honour of Claudio Castiglioni, father of then-MV boss Giovanni. The firm is now run by CEO Timur Sardarov. 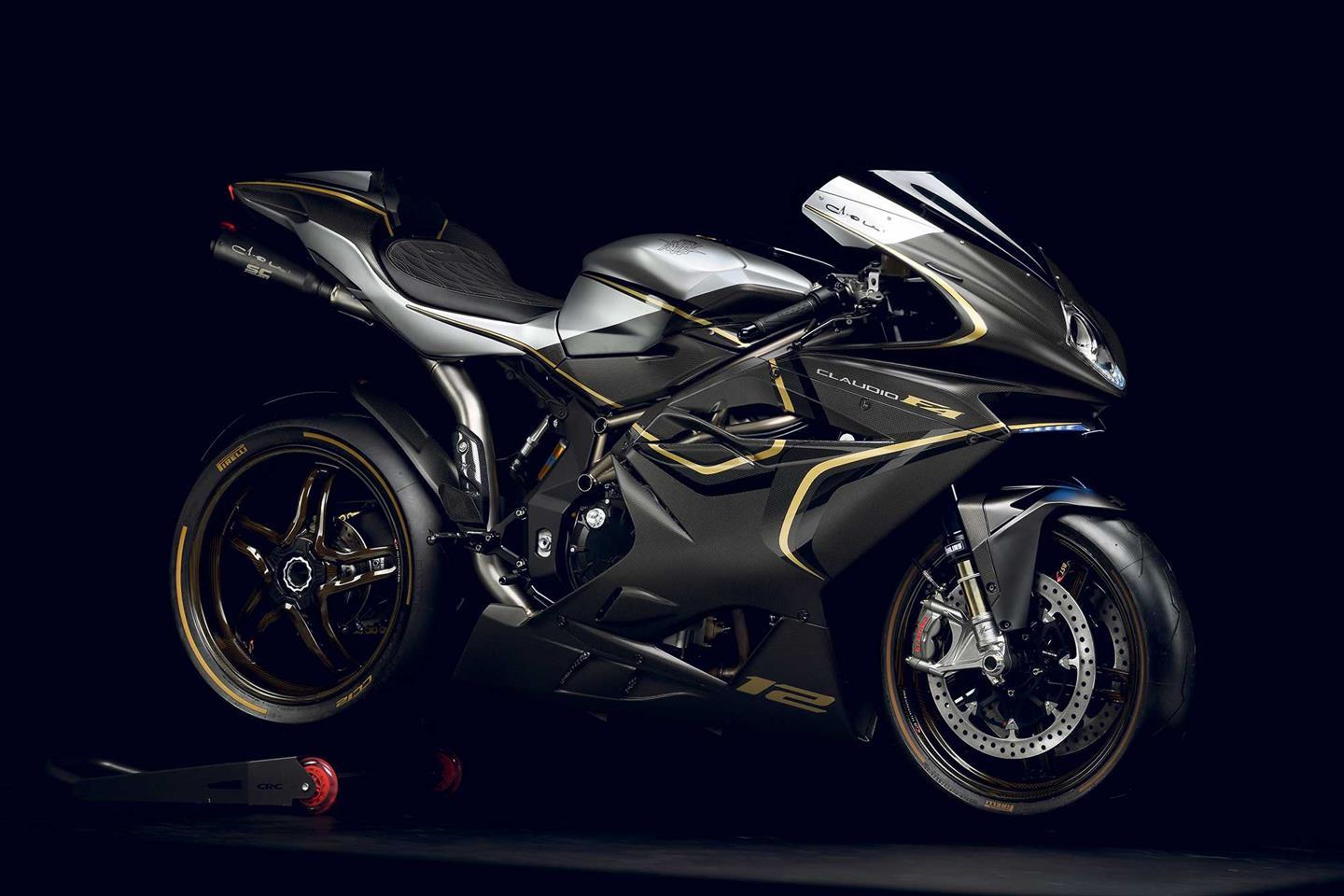 Put together by MV’s special projects department, the level of detail and finishing is astonishingly high. There’s MotoGP-style switchgear and GPS datalogging, while the bike is held together with titanium fasteners. It also boasts full carbon-fibre bodywork with unique paintwork set off by bare, lacquered carbon. There are also unique, lightweight BST carbon wheels with a golden hue.

Power is boosted for trackday use with a titanium SC Project exhaust, which boosts power from the stock bike’s 203bhp, while also reducing weight by 10kg. All of that adds to a whopping price tag, too: £64,000.

The bike is fantastic and highly emotional. The company still has room for improvement when it comes to after sales.

It feels like a proper race bike. The competition might have upped the ante meanwhile, but the F4 still does not feel anything like outdated. Brakes are superb and the chassis is rock-solid.

With the latest mappings, the engine runs smoothly, is confidence inspiring and has given up its overly snappy character without losing any of its character. The engine sound is very unique for an inline four and it is quite impressive, but not unpleasant. A decent level of tolerance from your neighbours is required.

Build quality is extremely good. There is so much attention to detail. The overall package of the F4 is robust and reliable. Minor things may happen a little more often than on the Japanese competition. The problem is not so much that it cannot be fixed. You just need to be aware that even a simple spare screw might take a week or two to be shipped. But the disastrous lead times of several months seem to be a relic of the past.

Definitely not cheap, but surprisingly fair for an exotic bike.

The bike had all the latest gizmos for the time. Of course, a new Aprilia or BMW will have more sophisticated traction controls and ABS systems on board now, but everything works just fine. And compared to new bikes, the lighting is full Xenon/LED also on the indicators. The quick release fasteners of the fairing provide a little extra sport appearance.

Buying experience: Buying an MV in my opinion and getting happy with it is much more dependent on the dealership than with more common bikes. They need to know the product and maintain a solid relationship to the factory.

As you walk up to her no other bike will make your heart skip a beat like the F4. She is stunning in real life. How her lines flow, the unique exhaust note, her character, everything is perfect. She is as fast as any other 1L super bike on the market today as 99% of day to day riders can't even get close to her full potential. She may not have the most superior tech wizardry but who cares unless you are Rossi or a seasoned club member. She still has traction control and ABS to protect those who dear try and take her over the edge.

I've done +400km journeys on her and I am 6'3". I have dropped the pegs slightly using rear set adaptors (only a $200 mod) and comfort level is very good. General around the town ride quality for a super bike is good. Pillion seat is ok (from a sports bike perspective) and good for short trip commutes with the girlfriend or mistress.

Strong engine - very impressive. When you wonna play harder she screams faster. No dead spots, power curve is predictable but the bite is so good it never gets boring. You mainly spend time worrying about lighting up the rear (if you have TC on 0), that's how good it is.

Unlike its peers none of the parts/fittings haven experienced a major recall or had to undergo a factory change. Build quality is extremely good compared to other brands. Paint work is a work of art, brackets, pegs, stems etc all top notch.

You always make sure you put the best oil and do regular service checks. It's not a very high running cost for a 1L super bike as one might think from an exotic. You actually don't care what the running cost is.

The whole package is top notch. Tyres are Pirelli SC's, quickshifter is decent (up shifts only), front brembo brakes. The seat - peg distance is narrow. Despite the higher seat it is a very aggressive riding position. Recommend adjusting toe pegs and rear sets.

MV Agusta F4 LH44 is a limited edition in collaboration with Lewis Hamilton. The F1 world champion is pictured here with the bike